Rotterdam ‘6 Days’: The ‘6 Days’ season seems to be getting shorter every winter, it certainly has been a curtailed activity for Ed Hood. This year he flew into Rotterdam for the final night before moving on to Bremen. Here is Ed’s report from the Rotterdam trenches. 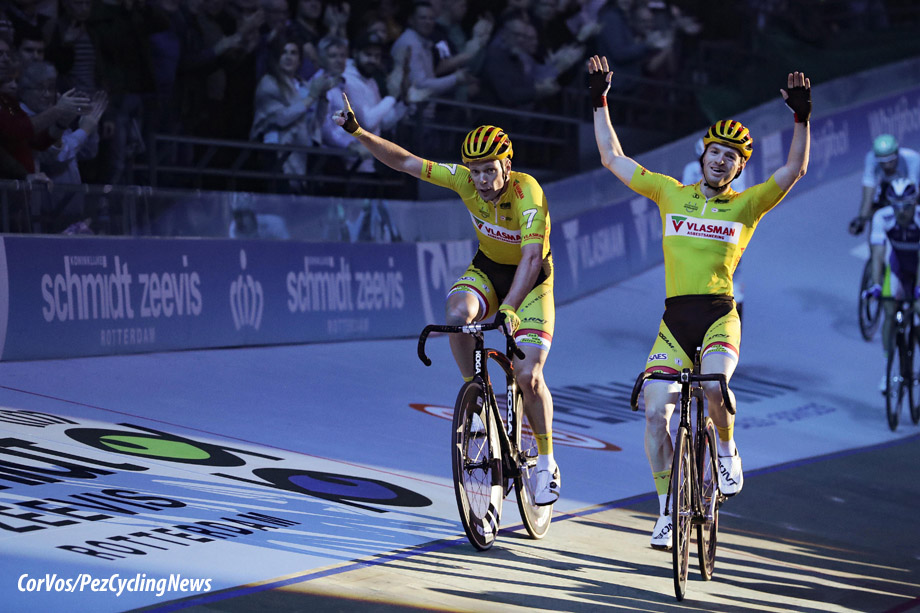 Don’t get me wrong, I still love the six days – the rumble of bone hard Conti’s on board, the rattle of 1/8” pitch transmission, the Europop (where else do you hear the Vengaboys these days?), the ladies and gentlemen fans in their finery, the sprinters, the lights, the smell of cologne and embrocation. . .

But the chases? What happened to ‘jams ?’ Dave says I expect too much, maybe he’s right? But back in the days of the Skol Six at Wembley, London in the 70’s a team might be hung out to dry for maybe 20/30 laps – the crowd willing them on. The chase behind hard and organised.

Now a team darts off the front and three laps later they’re back on the end of the string.
But Patrick Sercu has left us, Danny Clark, Don Allan, Rene Pijnen and all the rest are long retired. Riders like Roger Kluge, Iljo Keisse. Kenny De Ketele, Michael Mørkøv and a few more are all ‘quality boys’ but there’s not the same number of races for skills to be honed and strength in depth to develop. Having said all that, when you wander up the tunnel stairs and into the track centre at Rotterdam with the u23’s hurtling round, the lights blazing and the PA pumping it’s still damn cool. I parachuted in to Rotterdam on Tuesday afternoon to help Kris break camp and load the camper van in anticipation of our driving up to Bremen and the six day which starts there on Thursday evening. 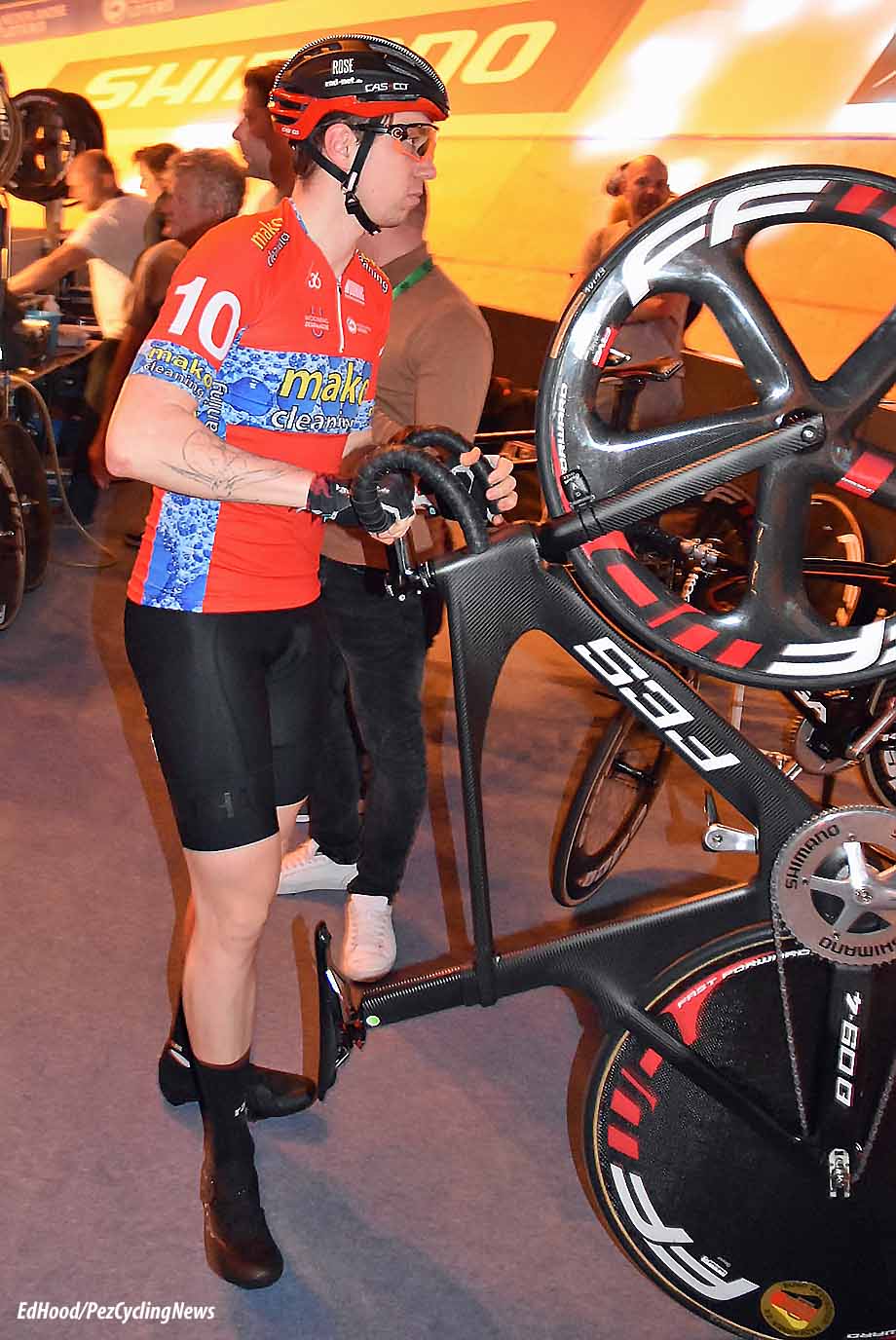 First race of the evening, after the rolling presentation was a 30 minute madison, with this being the last night and the big finale to come it was no ‘death race’ with Max Beyer (pictured) partnered with Spanish Movistar new recruit, European Scratch Champion, Seb Mora taking the win. In his victory interview on the finish line the speaker ‘bigged up’ their chances of a final podium. Mas was right to demure; the last chase wasn’t one they’ll seek to remember. 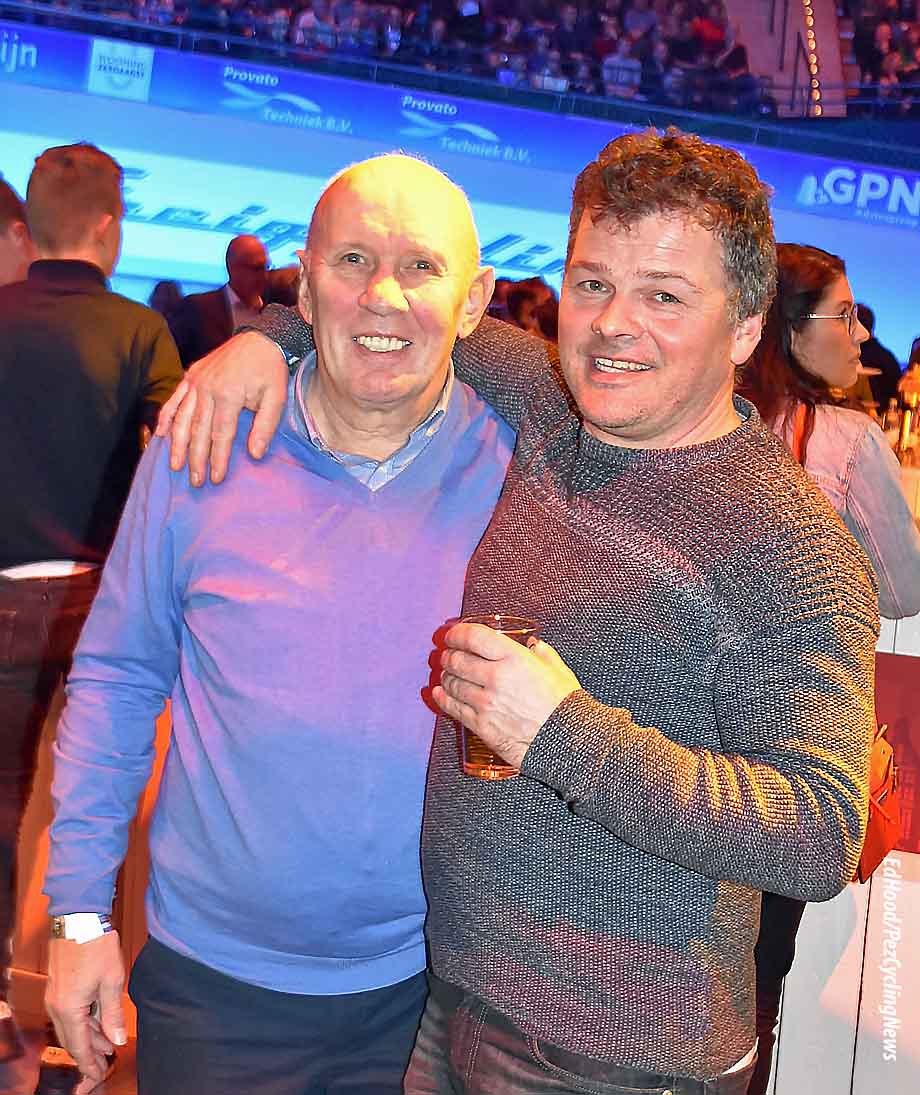 At a six like Rotterdam there’s always a star of yesteryear to spot; and today it was Rik 111 (left) aka Rik Van Linden, in the 70’s he was one of the very fastest roadman sprinters around with stage wins in all three Grand Tours; serving warning in his last junior season with 73 wins. 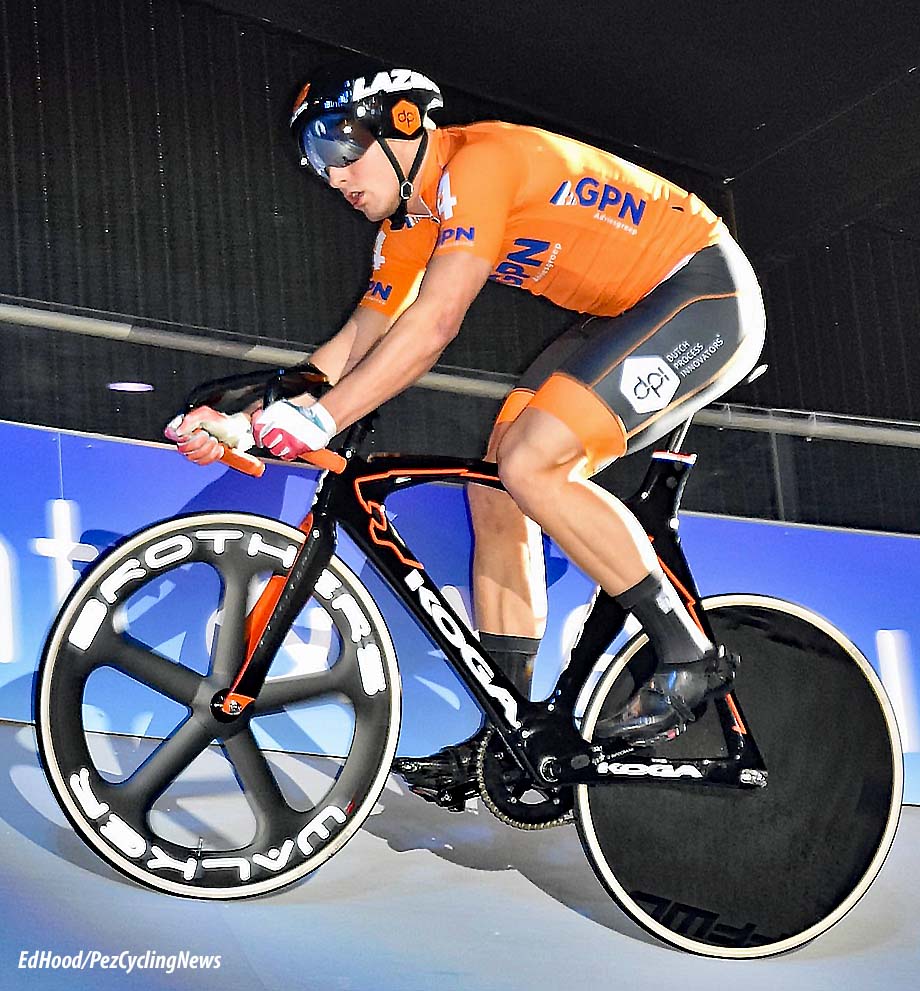 The sprinters were up next with big unit home boy, Harry Lavreysen breaking the track record with 9.8 ride in the flying lap, our picture shows his team sprint specialist team mate Sam Ligtlee on his wind up lap. 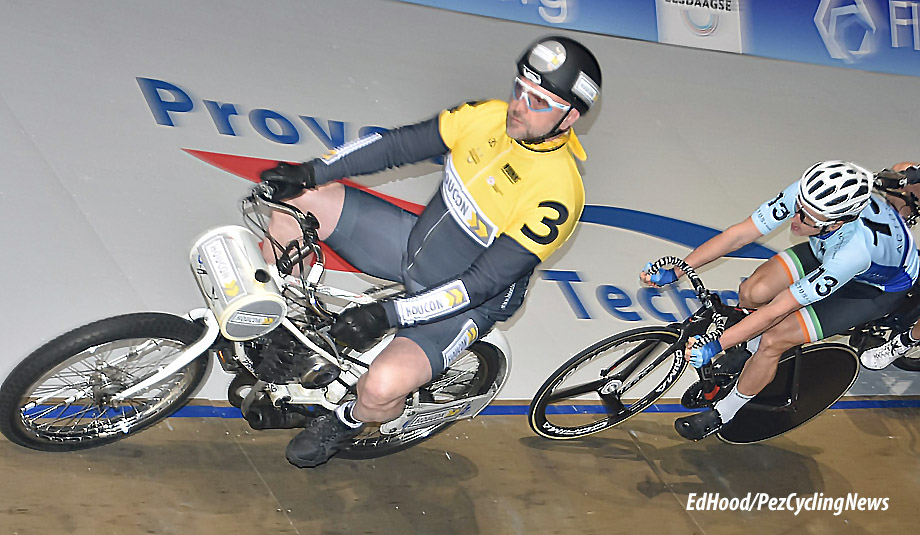 Dernys next, it never pays to lead early as number 13, Marc Potts found to his cost, heading the field in the opening laps to pave the way for a ‘surprise’ victory for home boy Maikel Zijlaard who’s grandad is a Derny pacer legend in the six days whilst dad, Ron still drives the little motor bikes. If you attend six days regularly then you’ll note that ‘home boys’ win the Derny quite often. . . 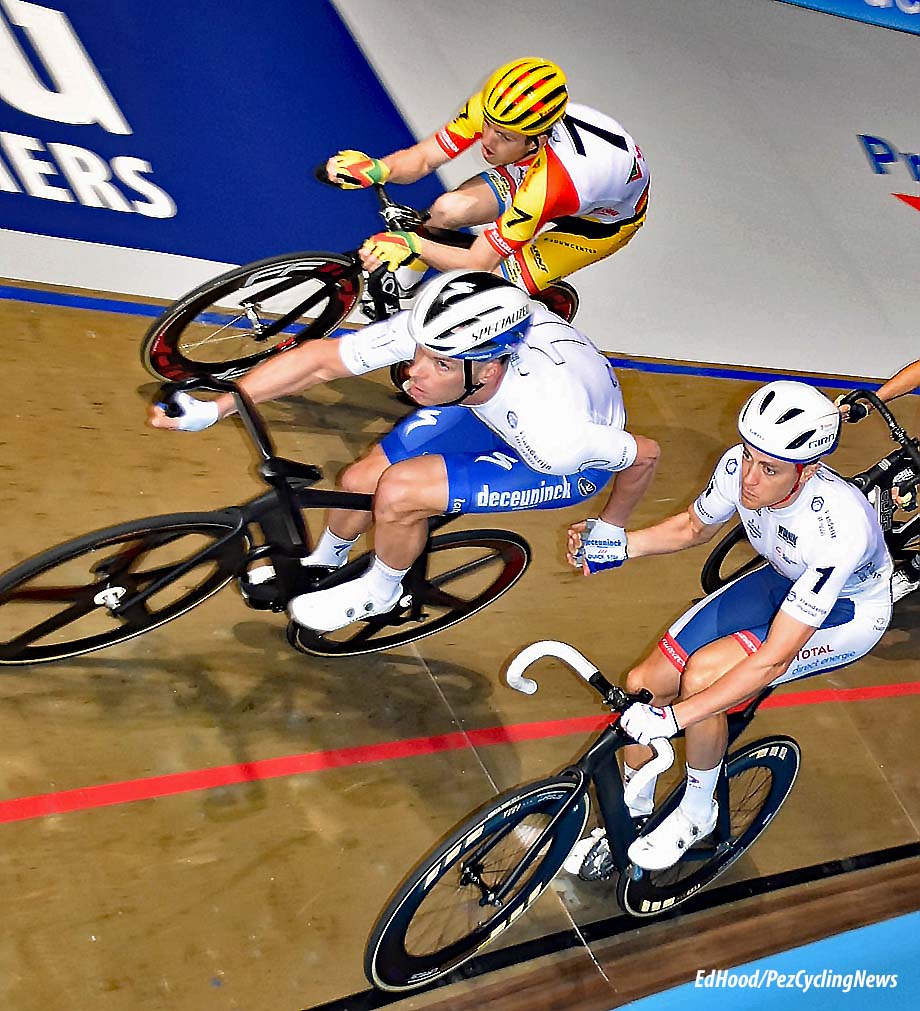 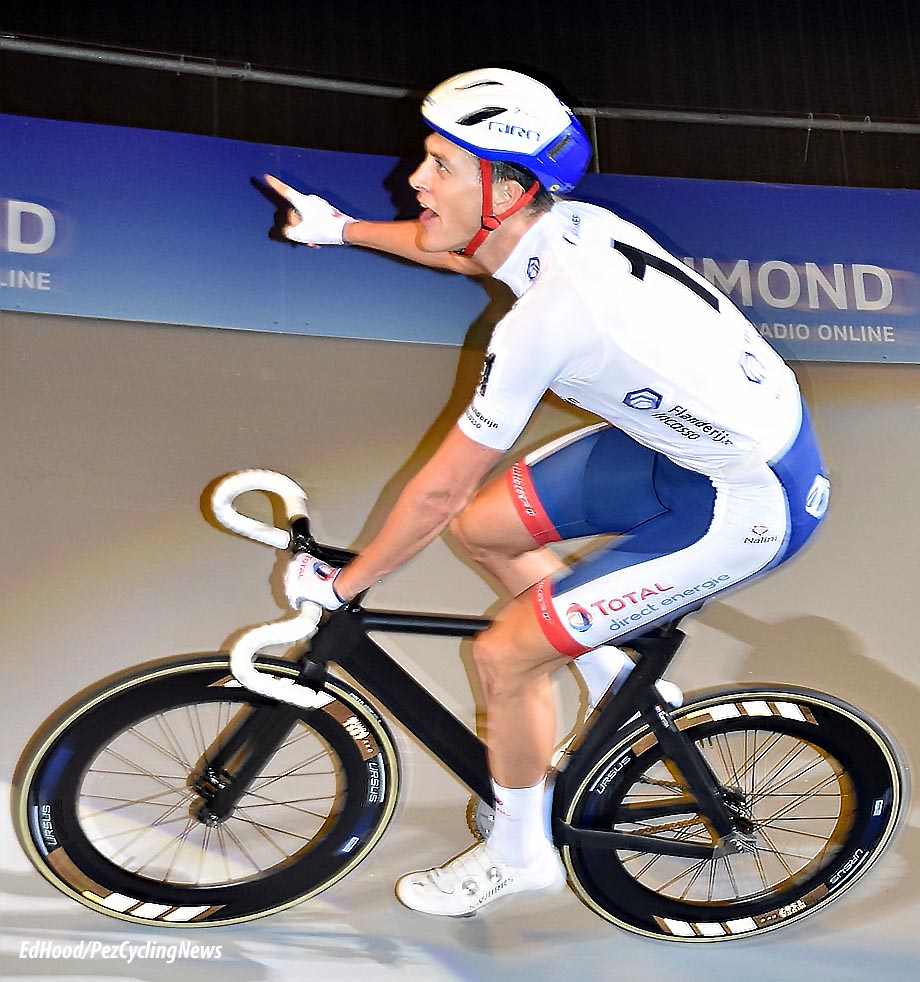 The devil went to Iljo Keisse and Niki Terpstra, more points in the bag but Niki not looking quite as sharp to my eye as he did last year when he was on rampaging form. Iljo is Iljo, one of the few real six day riders left, smooth and quick – a joy to watch; he’s off to the Tour Down Under after this. 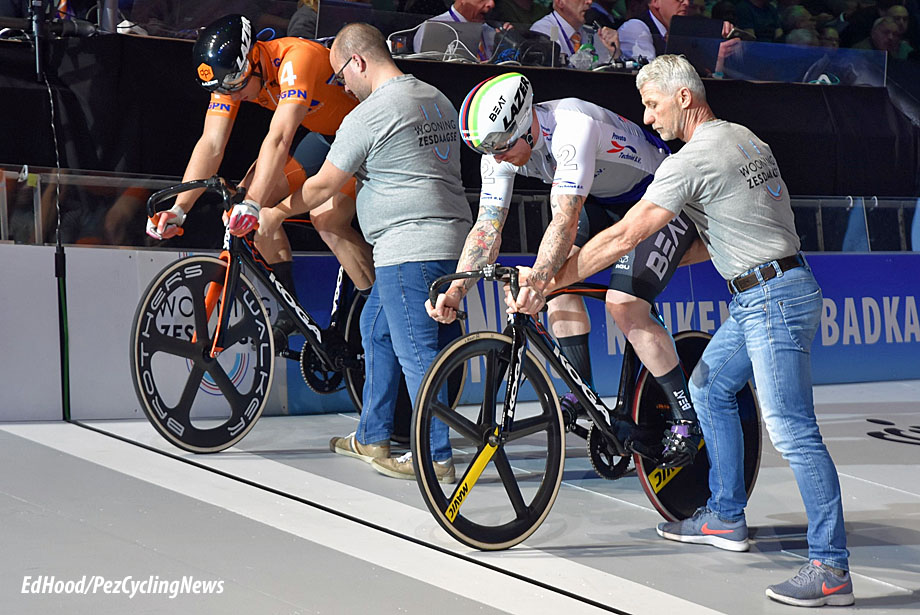 The sprinters were up again and as a runner one of your duties is to hold up the sprinters, for one heat I had home boy Roy van den Berg (on the right) he’s an angular, scary, tattooed dude who wasn’t impressed with my getting him to just the right angle on the start line. 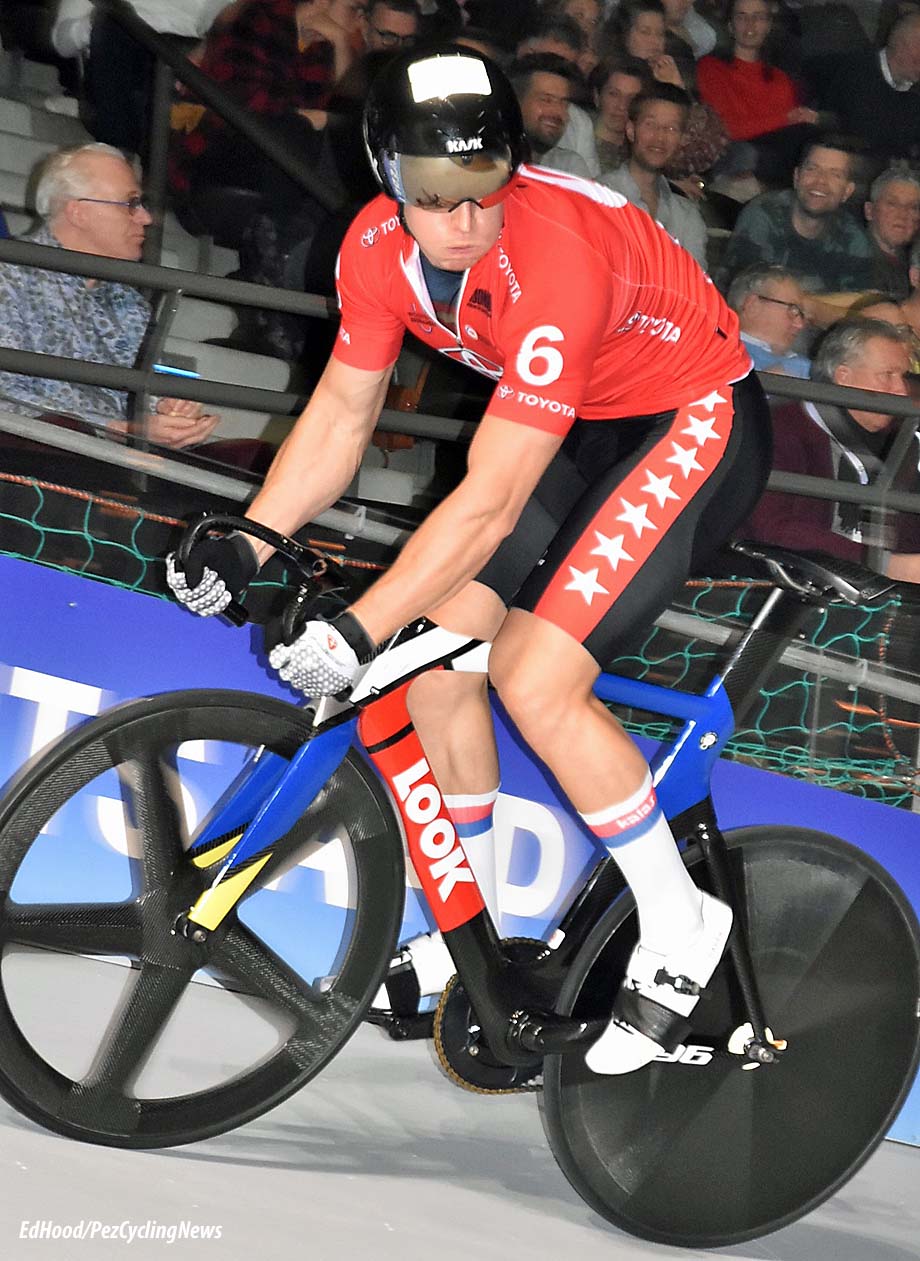 But our big guy, reigning European Kilometre and former European Keirin Champion, Czech Tomas Babek had no such complaints – he recognises a quality holder up when he encounters one. 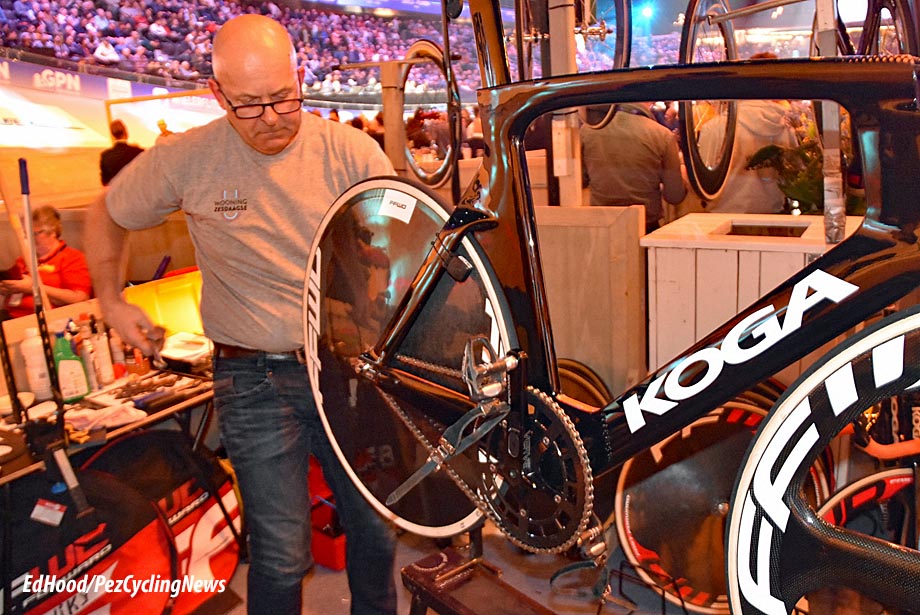 And them sprinters chainrings just keep getting bigger. . . 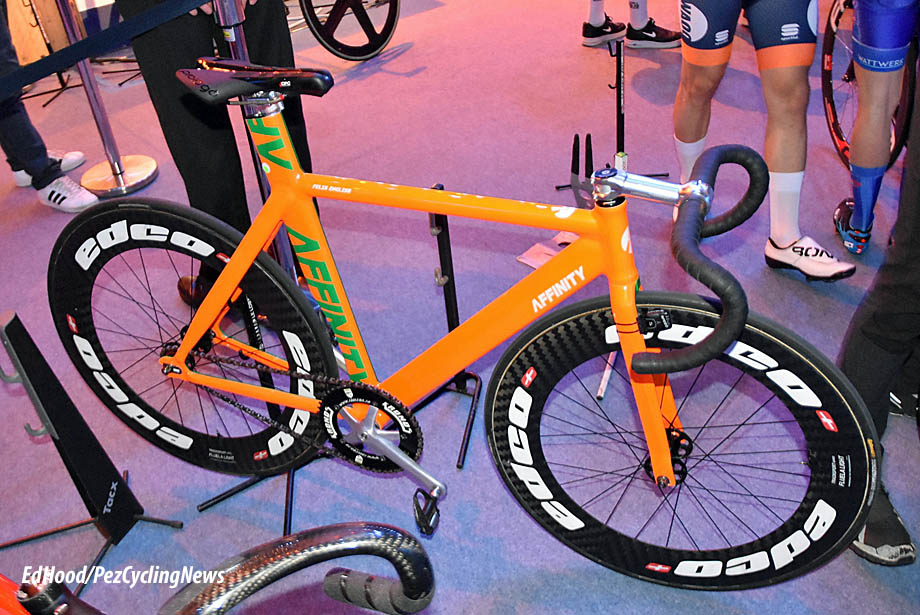 Whilst on the subject of hardware, we’re not sure about Irish rider Felix English’s new paint job – orange on one side, green on the other – maybe it will grow on us? 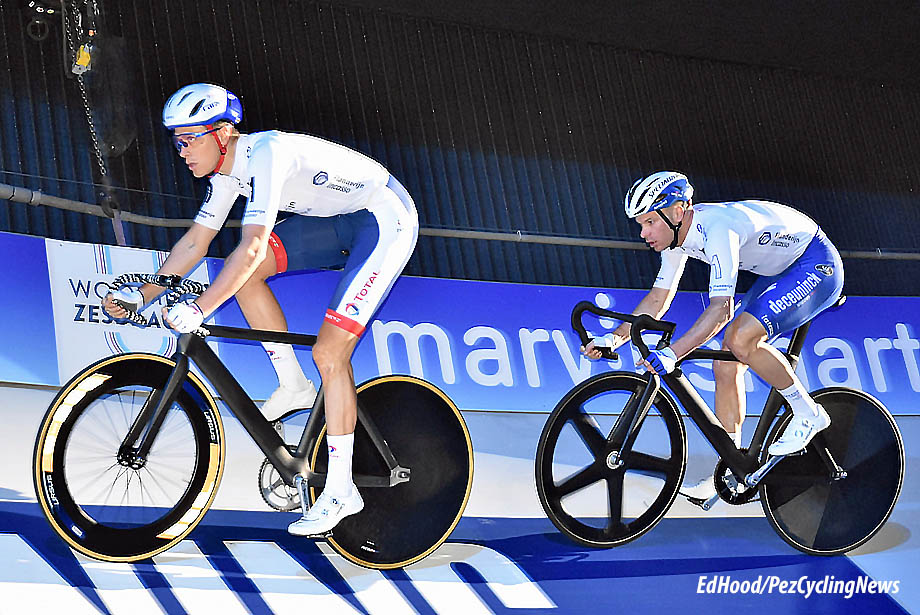 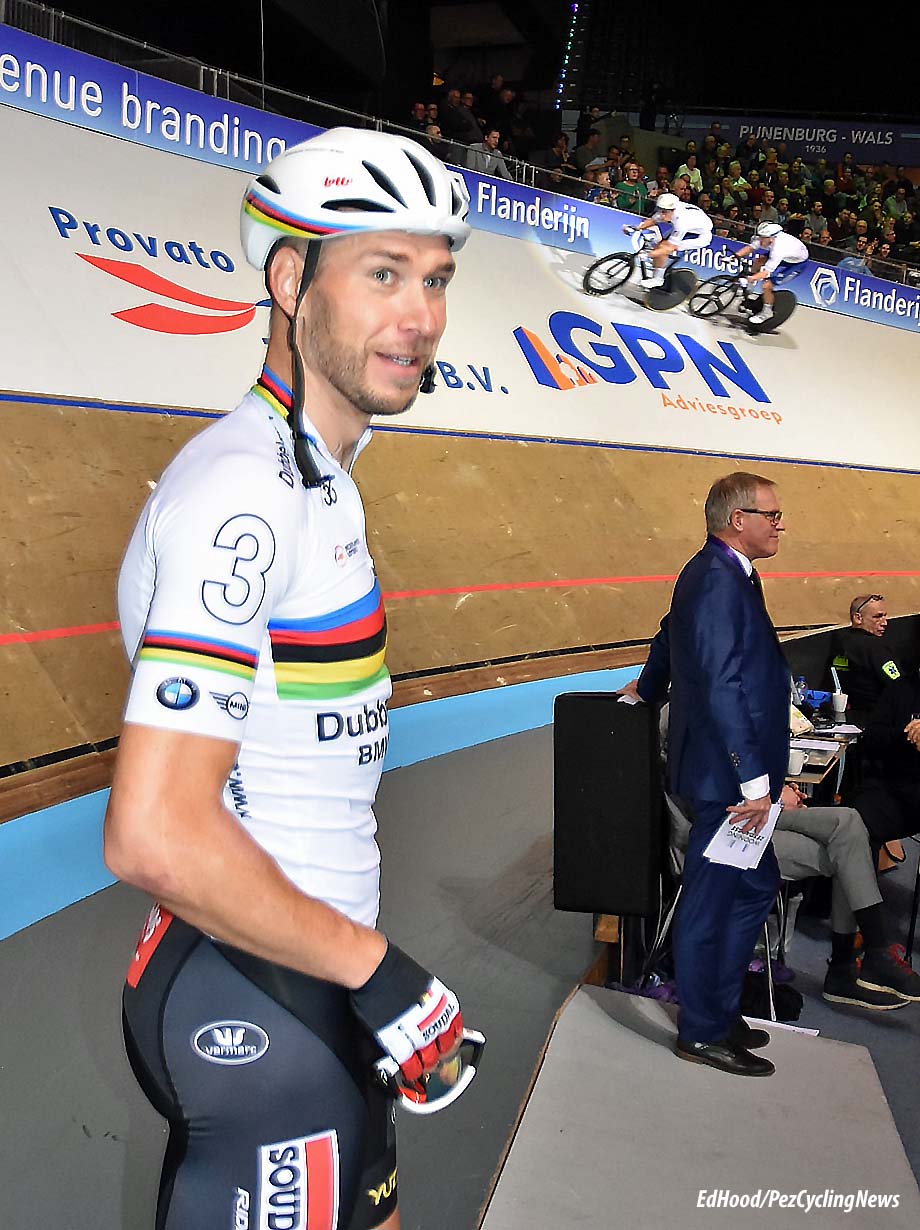 The flying lap was next up, Roger Kluge (German) and Tosh van Der Sande (Belgium) set fastest time – Kluge was originally partnered with world madison champion partner, Theo Reinhardt (Germany) but the latter dropped out due to illness; as did Van Der Sande’s original partner, countryman Jasper De Buyst. Big Roger hung around to keep an eye on Iljo and Niki. 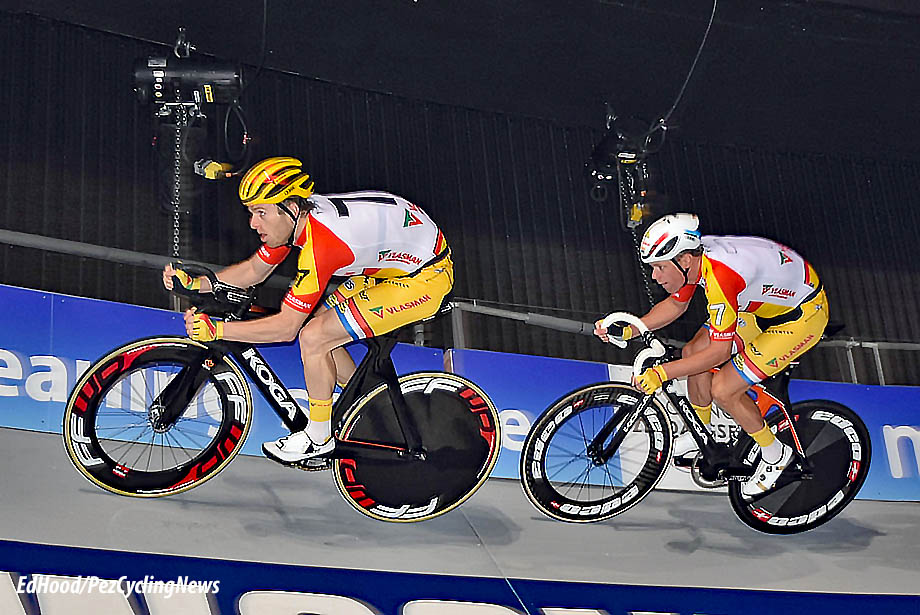 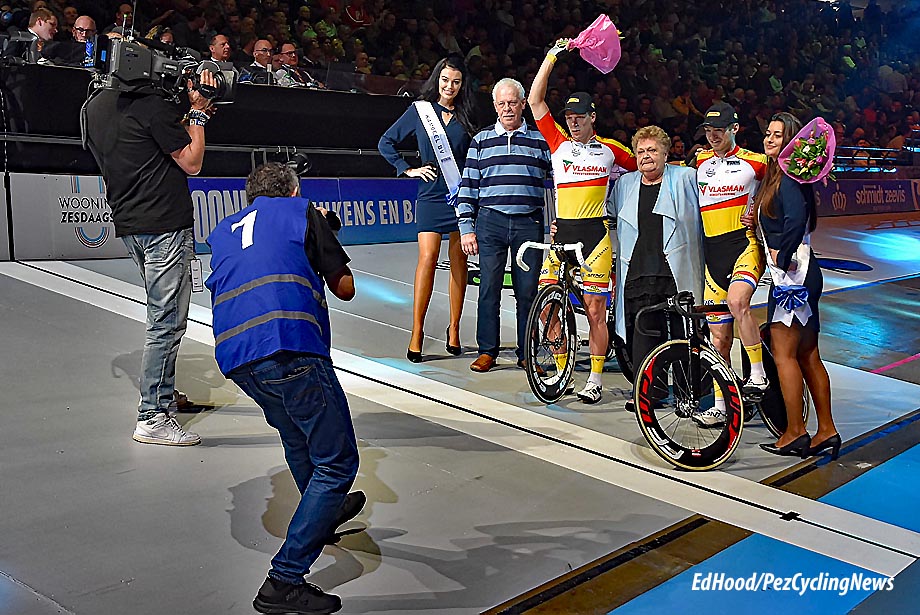 But it was local faves Yoeri Havik and Wim Stroetinga who did the damage, recording fastest time. 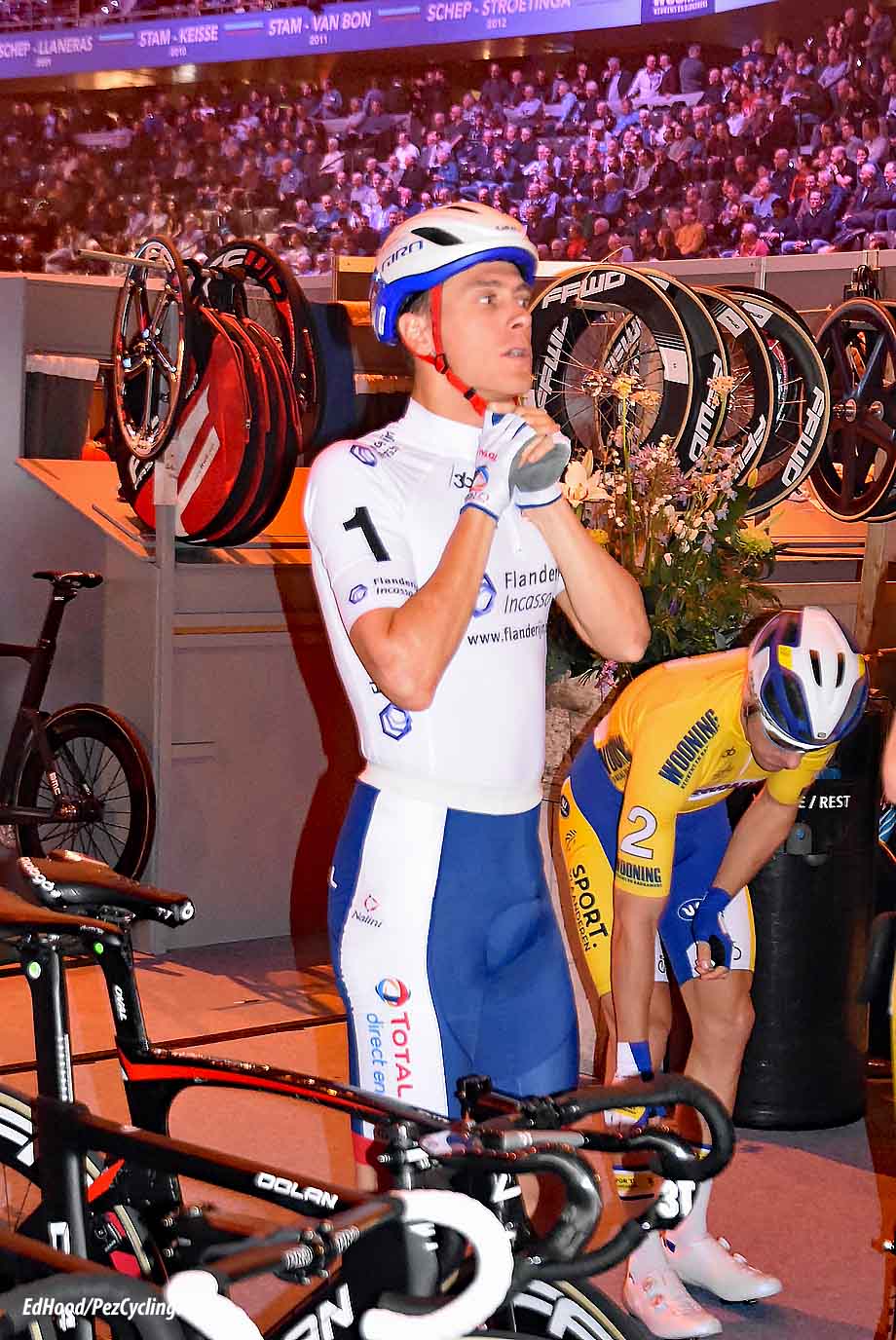 Derny Two and yet another ‘surprise,’ as Dutchman Niki wins – remember what I was saying about home boys and Dernys? 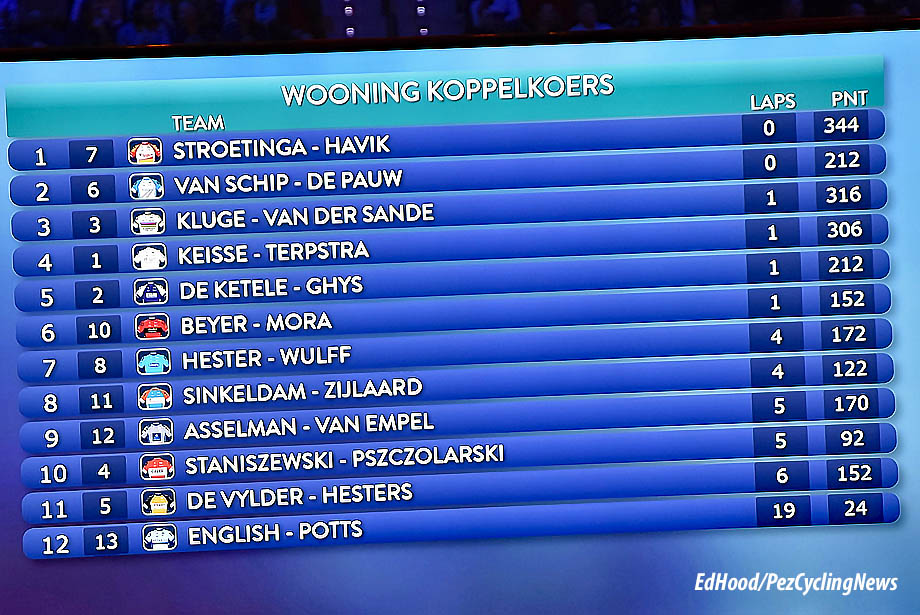 Going in to the last chase the standings looked like this. With Havik and Stroetinga riding as they were they looked difficult to shift in my book. 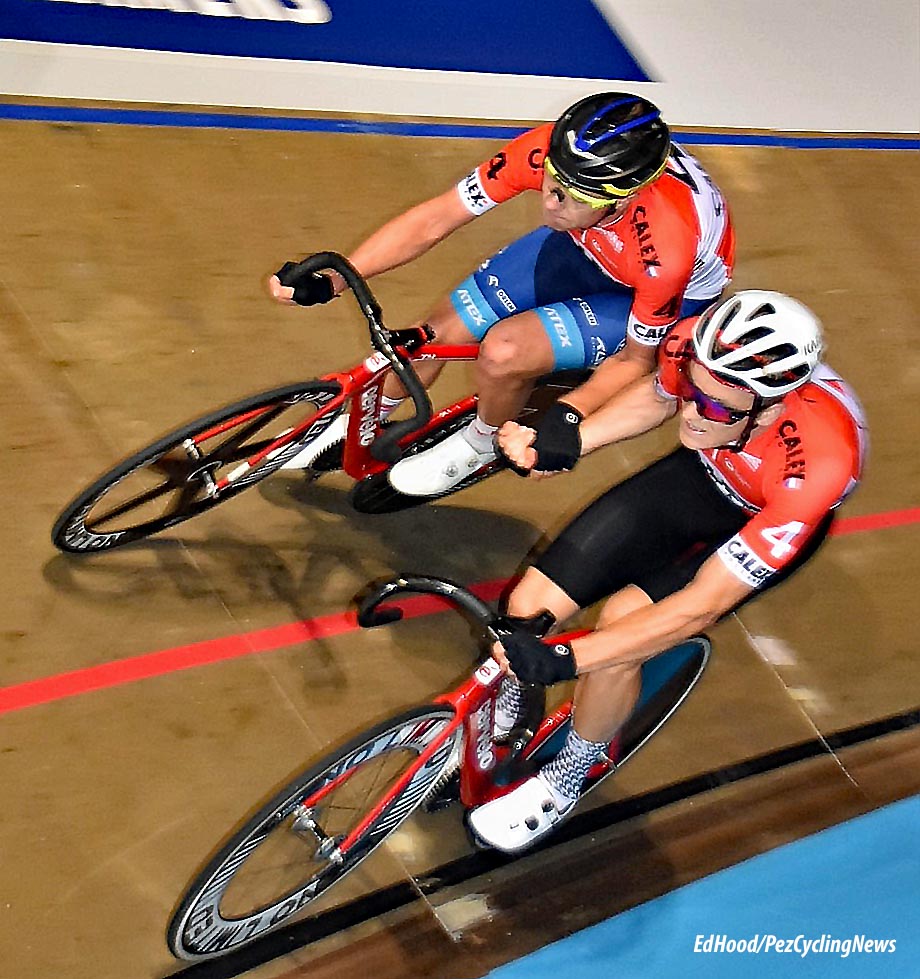 Our boys, Poland’s Daniel Staniszewski and Wojciech Pszczolarski finished mid-field, not great but not disastrous. 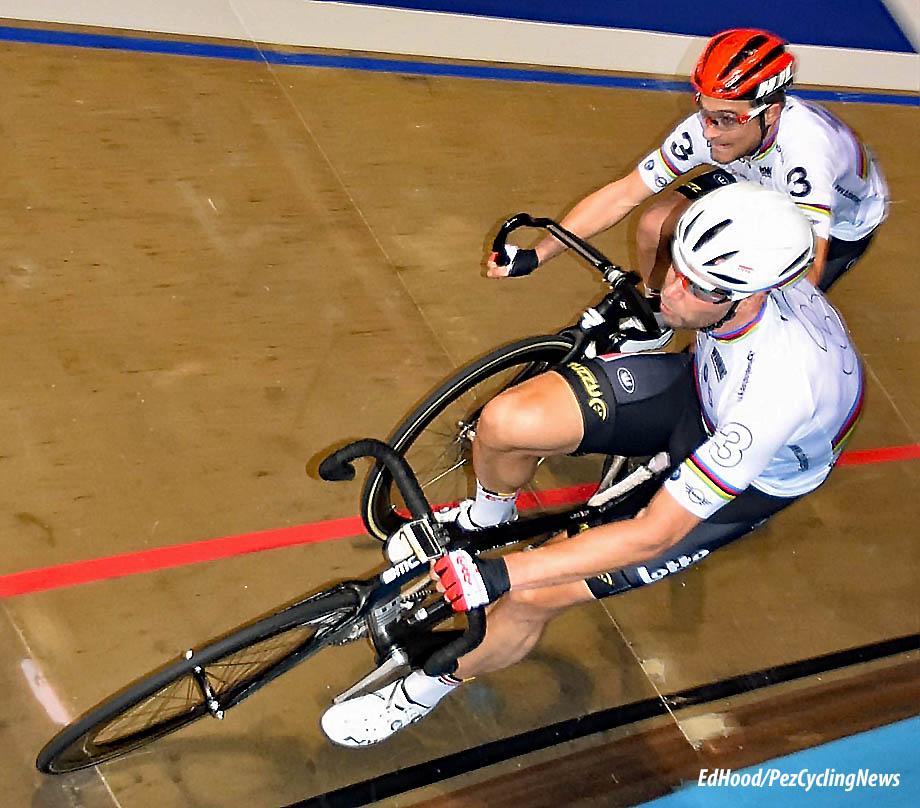 Big losers were Kluge and Van Der Sande who dropped off the podium to fifth, it was surprising to see ‘Big Rodge’ drop two laps he’s such a strong man. 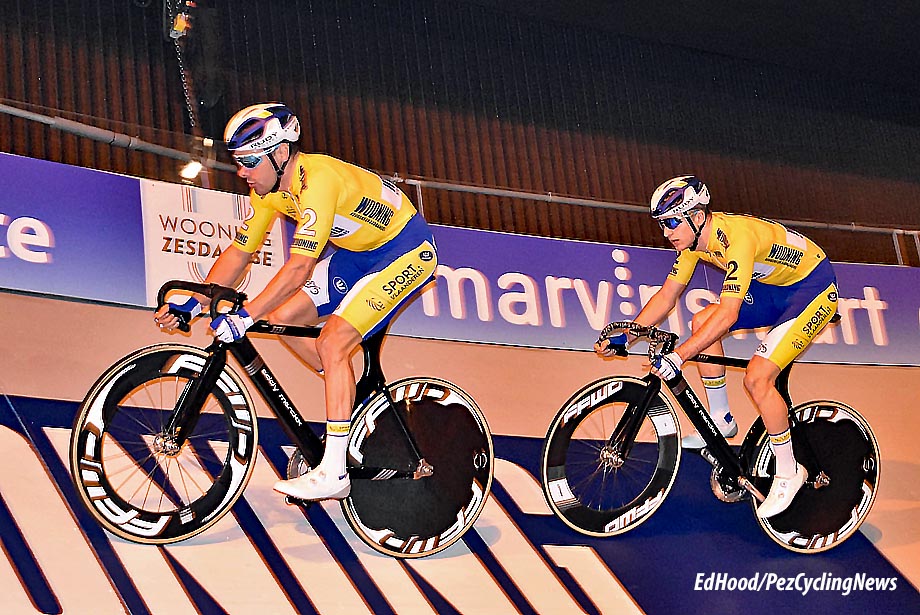 Third spot on the podium went to six day stalwart and former world madison champion, Kenny De Ketele. Kenny was partnered with young countryman Rob Ghys – the pair pictured here on their wind up for the flying lap – and were the winning pairing in Gent, last November. 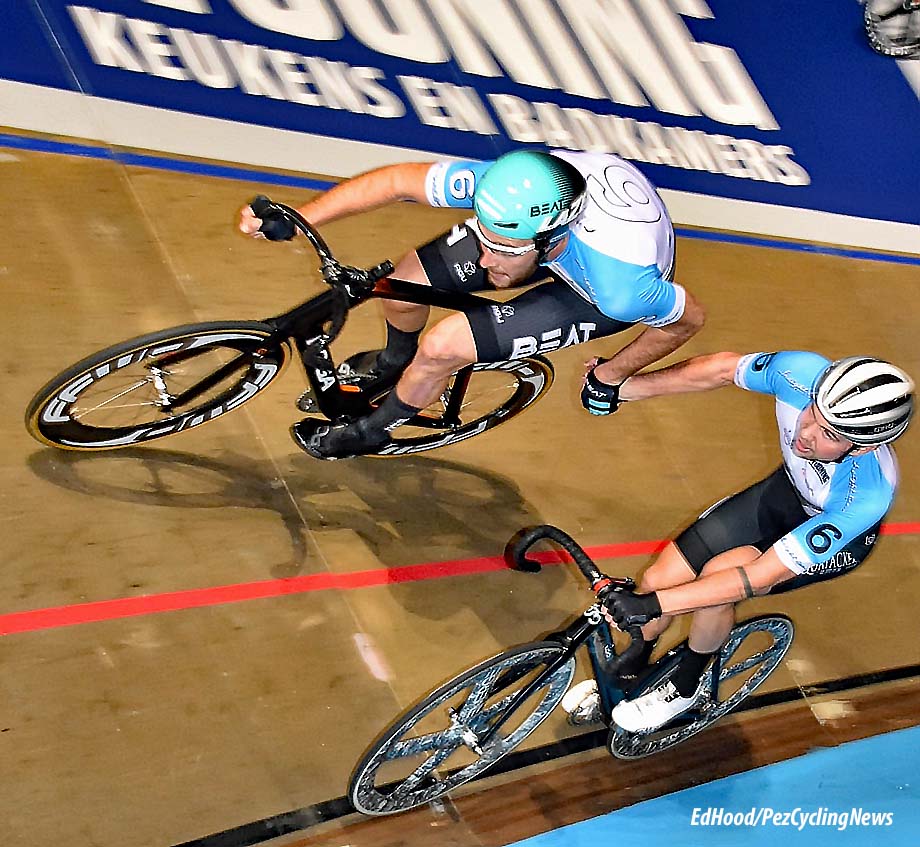 Second place went to Dutchman Jan Willem van Schip, a big strong boy who’s reigning World Points Champion. He partnered Belgium’s Moreno De Pauw who for a while was an ‘item’ with Kenny De Ketele in the six days with wins in London, Amsterdam, Gent, Copenhagen and Berlin. This is the last time he’ll ride Rotterdam, his career ends after the Berlin Six Day, we believe he’s going to pursue a career in the police force? 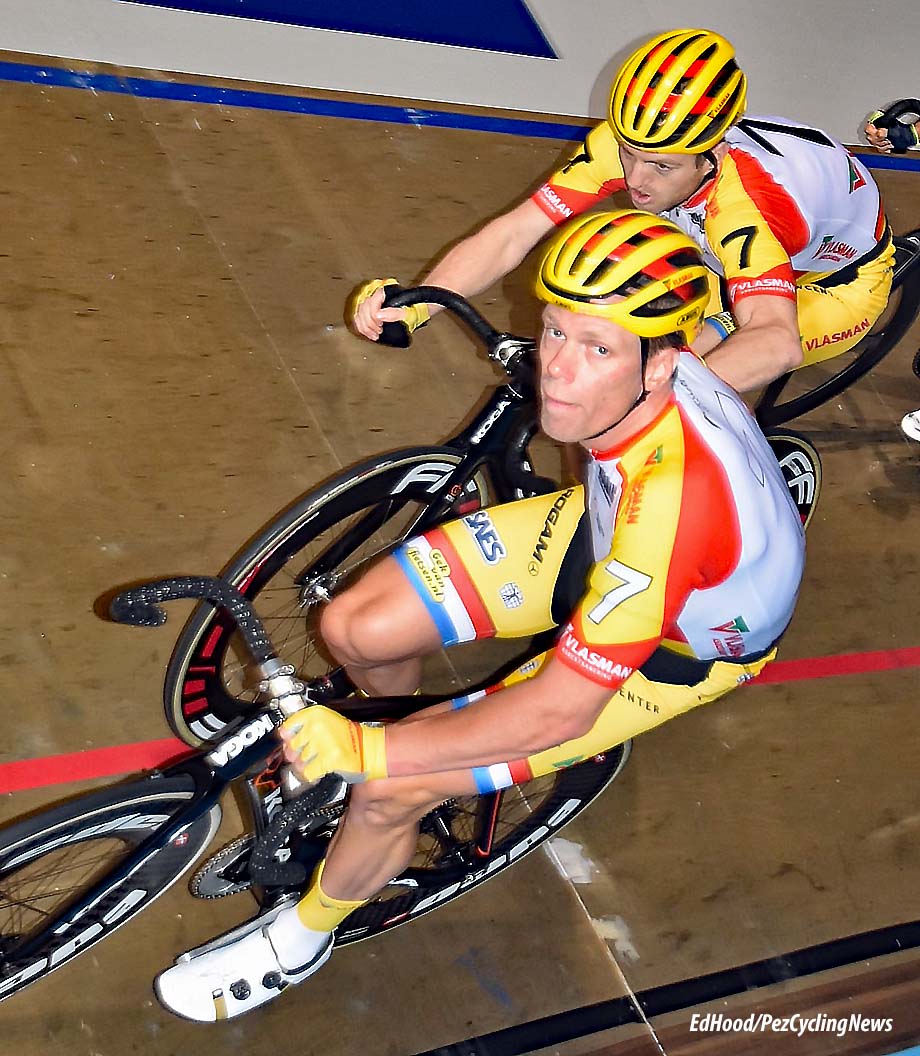 But deserving winners were Dutchmen Wim Stroetinga and Yoeri Havik. Stroetinga, who was a junior world scratch champion back in 2002 won this race in 2012 with turbine smooth countryman, Peter Schep, who’s now on the race organisation. Stroetinga has always been quick but used to a very physical, ‘all over the bike’ sprinter – in recent years he’s smoothed out his style but is still rapid. Havik gets that little bit better each year and 28 years-old is one of the best on the circuit – and he’s a fair roadman to boot. A fair result but not an inspiring finale to my eyes. Still, the crowd went home happy and we were on the road to Bremen before midnight. . . 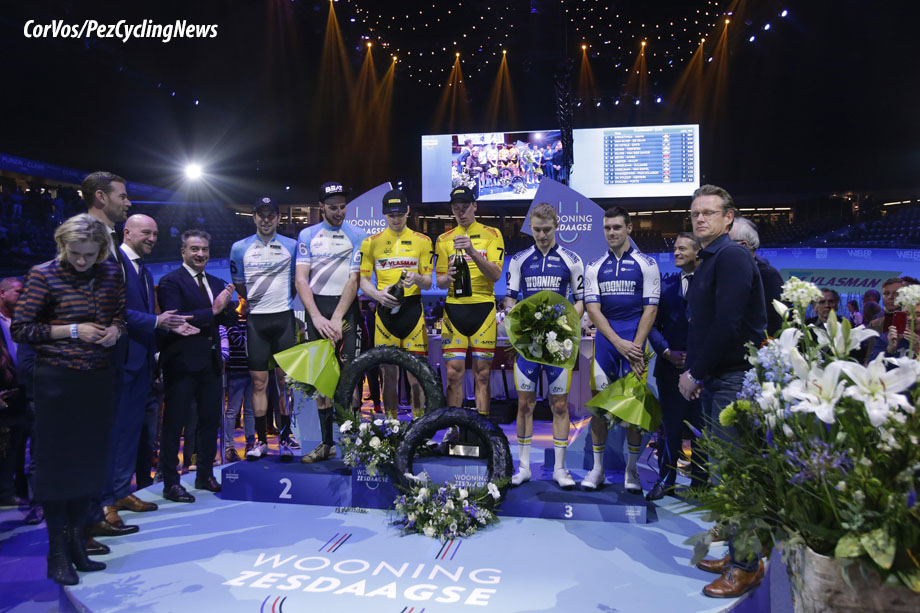 It was November 2005 when Ed Hood first penned a piece for PEZ, on US legend Mike Neel. Since then he’s covered all of the Grand Tours and Monuments for PEZ and has an article count in excess of 1,800 in the archive. He was a Scottish champion cyclist himself – many years and kilograms ago – and still owns a Klein Attitude, Dura Ace carbon Giant and a Fixie. He and fellow Scot and PEZ contributor Martin Williamson run the Scottish site www.veloveritas.co.uk where more of his musings on our sport can be found.