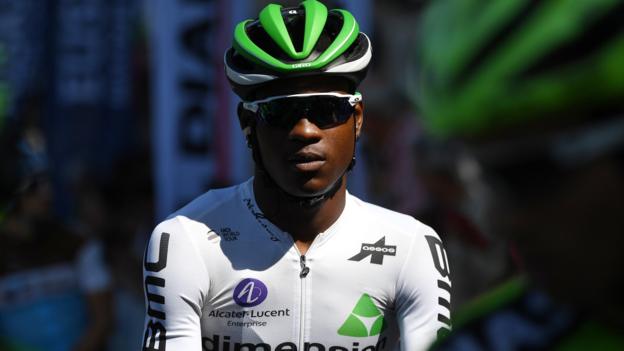 South African road cyclist Nicholas Dlamini has broken his arm after he was stopped by rangers in Table Mountain National Park while on a training ride.

Video of the altercation in Cape Town has been shared on social media.

South African National Parks says Dlamini, 24, was suspected of entering the park without paying an entrance fee and a “scuffle ensured” when he failed to show the requested documentation.

“I was both devastated and appalled to see the video of Nicholas on social media,” added Ryder. “To watch a young man who I know so well in such unnecessary distress made me feel sick, to be honest.”

His team said the injury will “have a serious effect” on his hopes of competing at the 2020 Tokyo Olympics. They also called for a “full public apology” and “immediate disciplinary procedures” against those involved.

In a statement, the team said: “NTT Pro Cycling can confirm that rider Nicolas Dlamini sustained a broken arm after being stopped by SANParks officials in the Silvermine section of Table Mountain National Park on Friday.

“NTT Pro Cycling also notes the release of a statement of the incident by SANParks. The video taken by the eyewitness clearly outlines the course of events which saw Nicholas sustain this injury.

“This is a major setback for the Capetonian who had been out on a training ride ahead of a hugely promising 2020 season.

“NTT Pro Cycling would like to be clear that we fully condemn violence in any form and are all highly distressed to see our team-mate treated in this manner.”

SANParks’ acting head of communications Rey Thakhuli told BBC Sport: “The rangers were alerted by the gate officials after somebody was seen entering the park without paying the mandatory fee.

“Upon investigation they stopped this man and requested him to produce all the necessary documentation and tickets, which he failed to do and a scuffle ensued.

“We are embarking on a preliminary investigation to determine the facts and all officials are being interviewed and eyewitness are asked to come forward. Video that has gone viral will form part of the investigation. Anyone found to be on the wrong side of the law will be dealt with.”