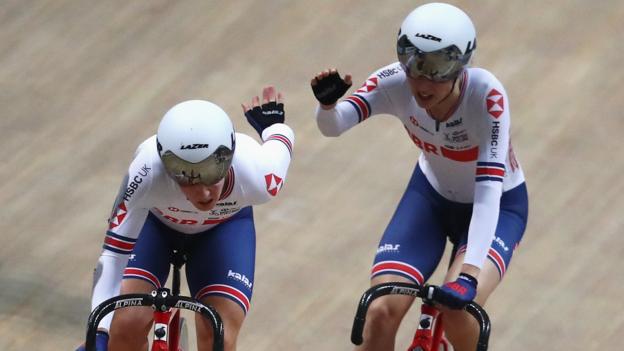 Katie Archibald hopes she can partner fellow Scot Neah Evans in the madison at the 2020 Olympics as they “have an almost unspoken dynamic”.

Archibald, 25, is targeting success in both that event and the team pursuit in Tokyo next year.

She and Evans, 29, won three of the five disciplines at October’s Six Day series in London.

“Neah and I have certainly had a lot of success together which is good,” said Archibald.

“We have an almost unspoken dynamic. Most of the time, we can think about what the other one is planning – when to move, when not to, when to attack; normally we are very on it as a partnership.

“It’s just a really good dynamic and it just flows. Its one of our strengths. Physically we’re quite different riders but the way we work is good – the way we attack the race is similar and it works well.”

Archibald and Emily Nelson won madison gold at last year’s World Championship but her place in the event in Tokyo is not guaranteed with competing nations limited to only one pair per event.

“The madison is going to be a huge spectacle it’s safe to assume [Evans and I] both want to be in that team,” Archibald told BBC Scotland.

“There are four contenders – me, Neah, Laura Kenny and Eleanor Barker, so we’re at an definite advantage with the depth we have in Britain and can learn so much for each other.

“We are both targeting team pursuit and madison selection – we want to win. We both want to have success in our sport – this is the pinnacle of it.”