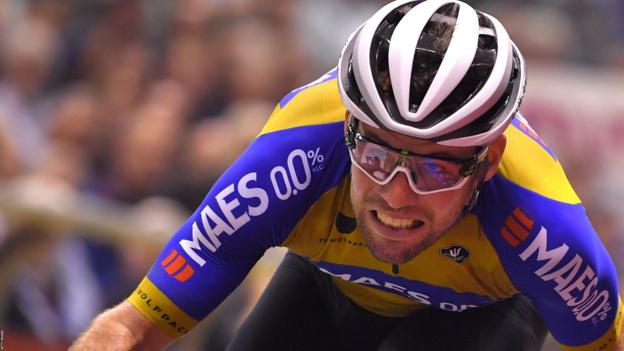 Mark Cavendish has been warned he faces an “extremely challenging” path to compete at the Tokyo 2020 Olympics.

Cavendish, 34, won silver in the omnium at Rio 2016 but wants to ride in the madison next year.

British Cycling’s head coach Iain Dyer has questioned if the 34-year-old will be able to earn enough qualification points and force his way into a competitive five-man squad.

“There are people there that have had their hand in the air,” Dyer said.

“The door is open but it’s extremely challenging to carve out an opportunity.”

The madison, returning to the Olympic programme after an absence of 12 years, is a discipline in which Cavendish is a three-time world champion.

However, Ethan Hayter and Ollie Wood took silver in event in the Glasgow World Cup last month, and were also part of the British team pursuit squad to take silver at the World Championships in Pruszkow.

And versatility in the squad could prove to be a barrier to the Manxman, with Dyer keen to have flexibility in both the pursuits and bunch racing events.

“You still want to have five that can ride the team pursuit, so to have someone who is solely a madison specialist in there and doesn’t have any other availability isn’t the perfect scenario,” he said.

“If one of the other riders goes down you’ve got a problem.”

Cavendish competed in the high-profile Six Day track events in both London and Ghent earlier this year.

He finished second in London alongside Owain Doull but is yet to earn enough qualification points for Tokyo, with limited opportunities left to do so.

With the Hong Kong World Cup having already taken place, there are three further editions to come – in Cambridge, New Zealand and Brisbane, Australia this month, and Milton, Canada in January – before the World Championships in Berlin in February.

“He needs to get 250 points [to qualify] and he’s got to do a counting event within the cycle, which would be a World Cup or the World Championships,” Dyer added.

“Opportunities are flying by which makes that increasingly difficult. You don’t do a madison on your own, so while it is still logistically a possibility the chances would appear to be diminishing at this point.”