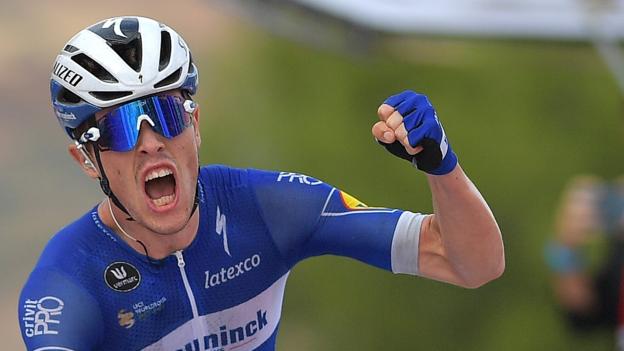 Frenchman Remi Cavagna sealed his first Grand Tour stage win on a day that featured mid-stage controversy in the Vuleta a Espana on Friday.

He launched a solo attack with just under 25km of stage 19 to go and held off his pursuers by five seconds.

Race leader Primoz Roglic was in a crash which split the peloton 65km out.

Alejandro Valverde’s Movistar team – against cycling convention – then attacked, but eventually slowed and Roglic was able to rejoin the peloton.

Movistar’s move angered many in the race, with fellow Spaniard Omar Fraile, who rides for Astana, remonstrating strongly with Valverde.

Jumbo-Visma’s Roglic, who went into the day holding a lead of two minutes and 50 seconds, eventually finished in 10th place, eight seconds behind Cavagna and three behind Valverde, who is second overall.

Stage 20 on Saturday – the penultimate day of the race – is a 190.4km mountain stage from Arenas de San Pedro to Plataforma de Gredos.

AASQ: LOOK & XPEDO get a foothold on the pedal questions burning at your sole
Muc-Off In-Store Refill of biodegradable Nano Bike Cleaner now available across US
‘An operation’s not for me, thanks’ – Kenny opts against surgery on broken shoulder
‘I’ll need to be in better shape than two years ago’ – Thomas aims for Tour de France and Olympic glory
Quai wheels w/Radically Staggered Lacing cross Pacific bringing unique-aesthetic carbon hoops