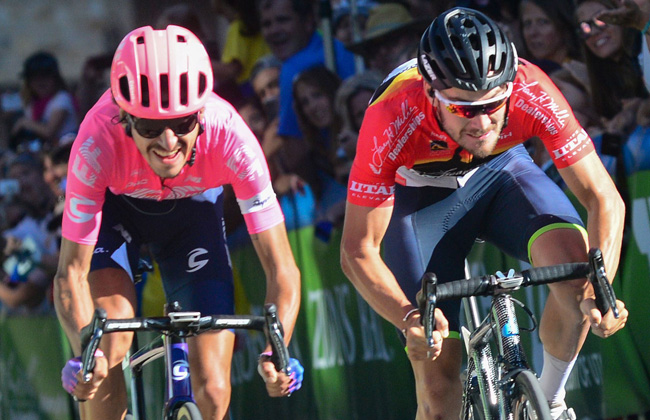 Race Report: Australian Lachlan Morton of EF Education First outsprinted his breakaway companion at the line to win Stage 5 presented by University of Utah Health in a thrilling photo finish at Canyons Village at Park City Mountain. Morton, who won the 2016 Tour of Utah, scored his fourth career stage win in Utah Saturday in a time of 3 hours and 5 minutes.

Morton made his way into the 11-rider breakaway, which escaped early in the 85.1-mile (137-kilometer) stage. The steep slopes of Olympic Parkway at Utah Olympic Park are where Morton and Hayden McCormick (NZL) of Team BridgeLane launched their attack and blazed a trail to the finish line together. 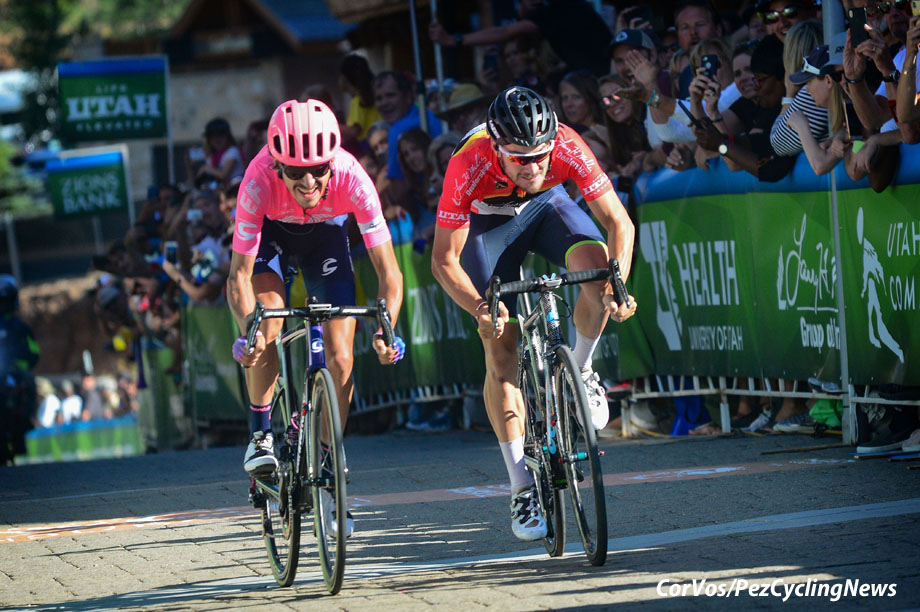 “I’m not normally one to look at the finish, but I had a feeling. So five minutes before the start, I went and rode the last 300 meters,” Morton said about scoping out the uphill finish at Canyons Village at Park City Mountain. “The only chance to come around is in the last 50 (meters). Very perfect timing for me, which I’d love to say that I planned, but sometimes luck falls that way and you get the win.”

In a hard-fought sprint, McCormick took second place by a tire-width difference. The battle for third place was taken by Simone Velasco (ITA) of NIPPO-Vini Fantini-Faizanè, who outmaneuvered the chase group which included Stage 4 winner and teammate Marco Canola (ITA) and Evan Huffman (USA) of Rally UHC Cycling. Velasco crossed the line 18 seconds behind the winner.

“Today I wanted to try and get the KOM jersey, which was the main goal of the day. Obviously, I tried to win the stage. It was a good day, nice to redeem myself a little bit after yesterday,” said McCormick, who was leading Stage 4 in Salt Lake City on Friday and posted one lap early to fall four minutes behind the eventual winner. On Saturday, he claimed the Utah Office of Tourism King of the Mountain jersey.

Stage 5 presented by University of Utah Health started and finished in Canyons Village at Park City Mountain. The breakaway escaped early from the 101-rider field and pushed the gap to over four minutes as they raced passed Rockport Reservoir. The move included Morton, Travis McCabe (USA) of Worthy Pro Cycling, and two Team BridgeLane riders, McCormick and Dylan Sunderland (AUS). With less than 10 kilometers to go, Morton countered an attack by Sunderland and only McCormick was able to cover his acceleration.

“The BridgeLane guys played it really smart, and as I would expect from an Australian team, they’re always pretty cagey. So my only play was to try to get rid of one of them before the top, and just take one to the line. That’s how it played out,” added Morton.

In his third day in a breakaway, McCabe collected top points in the two intermediate sprints and finished 10th on the stage to solidify his lead in the Utah Sports Commission Sprint jersey competition. Kevin Vermaerke (USA) of Hagens Berman Axeon was voted the America First Credit Union Fan Favorite, in the category of Most Promising Rookie.

Stage 6 presented by Utah Sports Commission brings back the overall finish to Park City on Sunday, Aug. 18. It is the 10th year Park City has served as a host city, and seventh time it will host the final stage of the Tour. The 78.2-mile (125.9-kilometer) route will pass through Kamas and Midway before the final attacks on the unrelenting asphalt of Empire Pass, encountering road pitches of 10 to 20 percent. The hors categorie (above category) summit of Empire Pass is the final KOM and the highest point of the race for the week, at 9,700 feet above sea level. A blistering descent down Marsac Avenue leads to the finish in front of historically massive crowds along Upper Main Street in Park City.

The Larry H. Miller Tour of Utah is free to all spectators, making professional cycling one of the most unique sports in the world today. The Tour of Utah is a internationally sanctioned as a 2.HC-rated stage race on the UCI America Tour, and is part of USA Cycling’s Pro Road Tour. More information about the Tour of Utah can be found by visiting www.tourofutah.com, as well as social channels Facebook (tourofutah), Twitter (tourofutah), Instagram (thetourofutah) and YouTube (tourofutah).