Obituary: The greatest ever Italian cyclist, Felice Gimondi, passed away on Friday after suffering a heart-attack while swimming in the off the Sicilian coast. Ed Hood remembers the always smooth and cool Italian character who was a champion amongst some of the best ever road men. 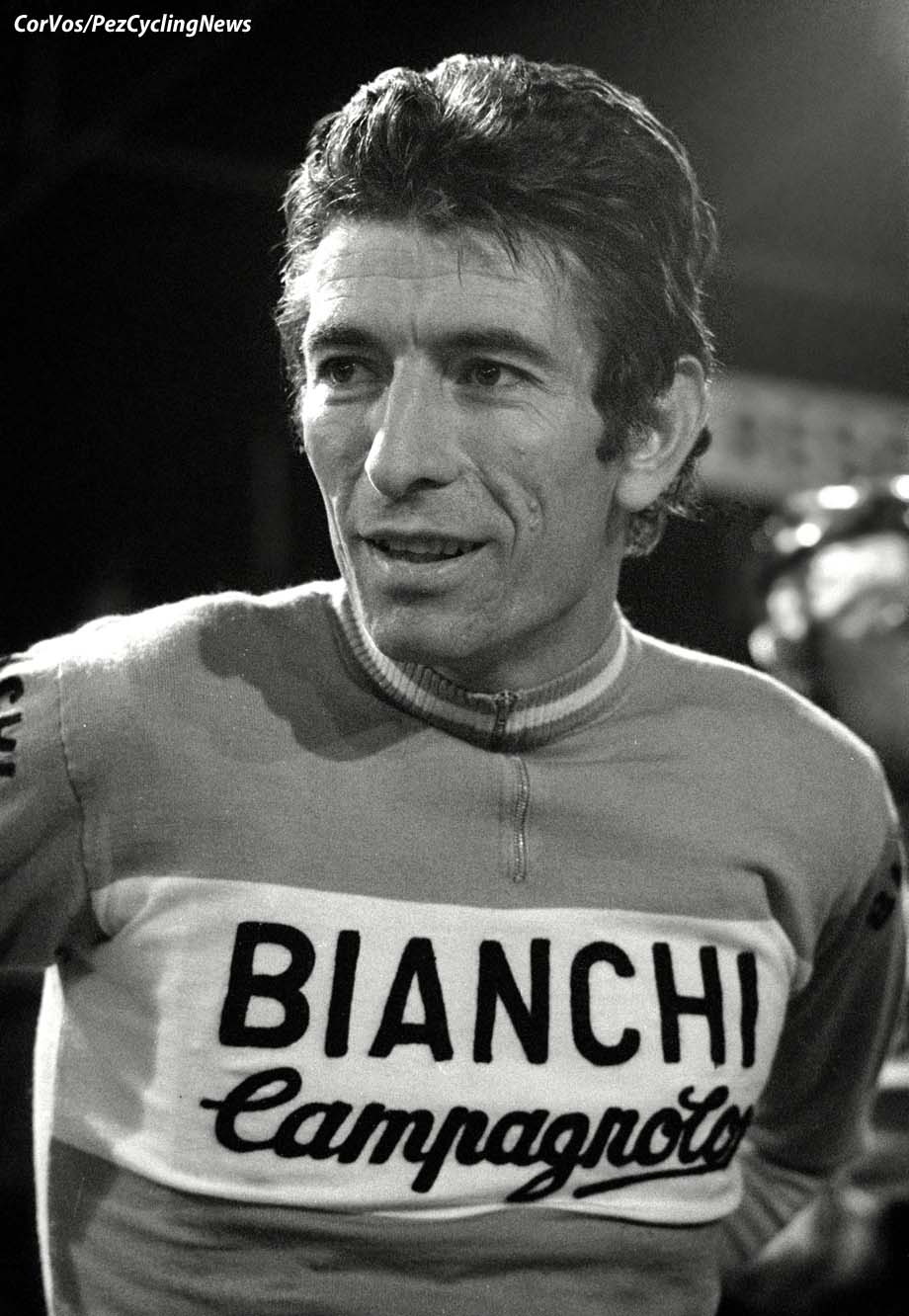 I’d just come out of anaesthetic after my operation and the first thing I saw was a name badge on an orderly’s chest, ‘Felice’ it read. ‘Which part of Italy are you from ?’ I slurred. ‘Birmingham !’ the orderly sneered at me. Undaunted, I pressed on; ‘there’s a famous Italian cyclist called Felice Gimondi. . .’

The lad’s voice softened and he looked at me quizzically ‘my father was Italian and Gimondi’s biggest fan, that’s who I’m named after,’ he smiled. I went from being an old fool to gaining respect in a single sentence.

Then there was the time back in 1974 when ITV actually WAS showing footage from Milan-Sanremo on a Saturday afternoon in between, soccer, wrestling – it was big back then – golf, bowling and whatever else. I was watching on our tiny black and white TV – my dad reckoned colour televisions were a ‘gimmick’ – and there was Felice, solo, in all his stylish, rainbow jerseyed glory on his Bianchi on the Ligurian coast road bound for a glorious victory on the Via Roma.
I was puzzled though, after he passed, the tifosi were throwing themselves down on their knees on to the tarmac, as if in prayer – then I realised, they were kissing the tar which he just ridden over. As if I hadn’t known already, I now realised categorically that there would only ever be one sport for me. 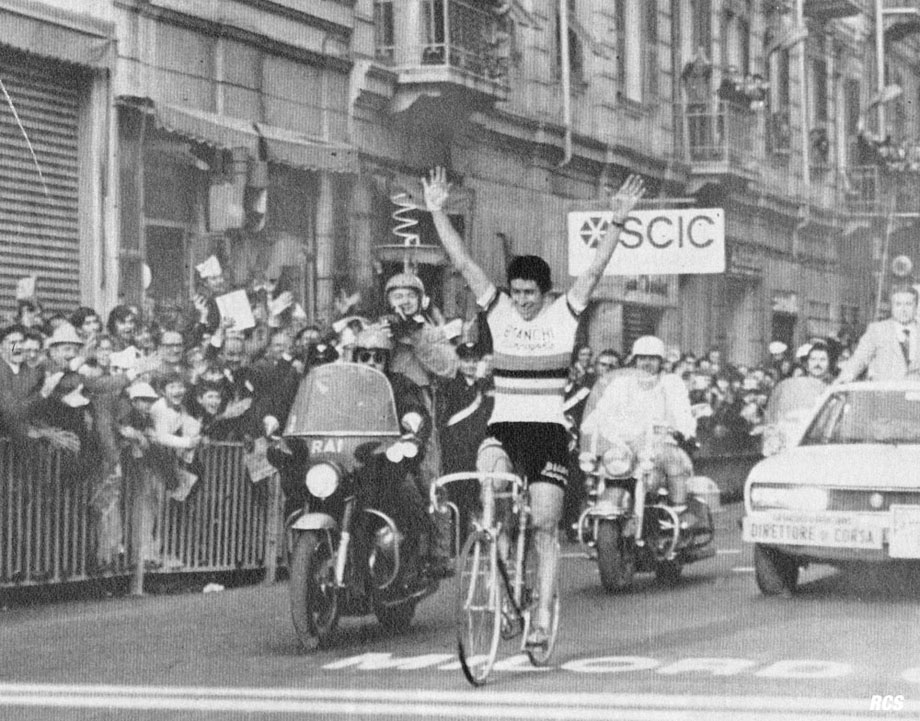 Dave Chapman and I came across ‘The Maestro’ on our various Giro adventures, there was always a smile for us and posing for a photo was no problem to the always elegant, distinguished gentleman in front of my camera. 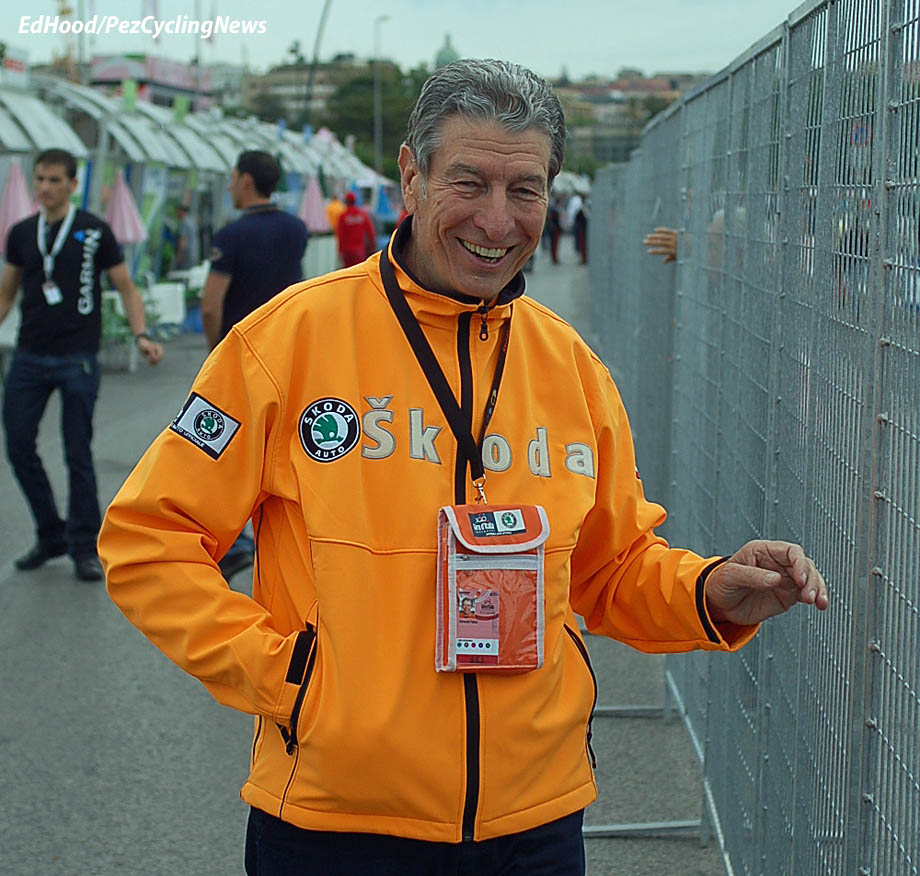 Felice Gimondi was born 29th September 1942 in Sedrina, Bergamo. He died whilst swimming at the beach resort of Giardini Naxos, Sicily on 16th August, he is believed to have suffered a heart attack.

As an amateur he rode for US Sedrinese with his first big win coming in 1963, the Giro del Friuli. Within a year he’d won the biggest amateur stage race in the world, the 1964 Tour de l’Avenir – then, as now a passport to the professional ranks. 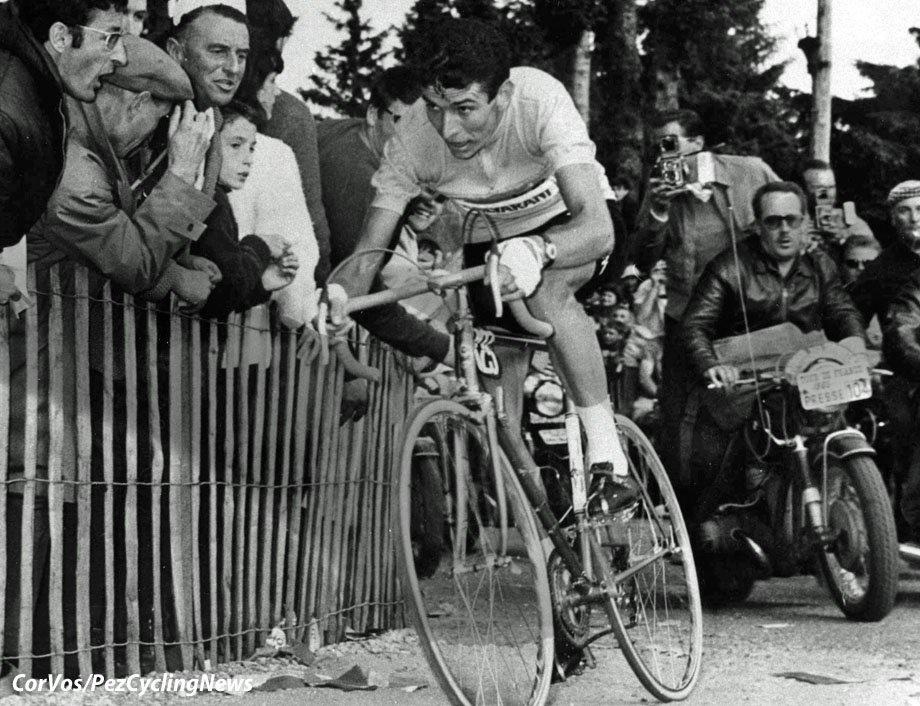 Gimondi signed for Italian luxury kitchen company, Salvarani for 1965 and as a neo pro give Italy her first Tour de France win since Gastone Nencini in 1960. A year later in 1961 he was demonstrating the versatility that would hallmark his career with Classic wins in Paris-Roubaix, Paris-Brussels and the Tour of Lombardy.

In 1967 he took the first of his three Giro wins; he would finish on the podium a record nine times and take six stages in his home Tour. There were also two Tour stages that year as well as the Giro del Lazio; he eventually won just about every Italian semi-classic on the books including the Giro dell Appenino, GP Forli, Giro dell Emilia, Coppa Agostoni, Coppa Bernocchi, Giro del Piemonte and Coppa Piacci. 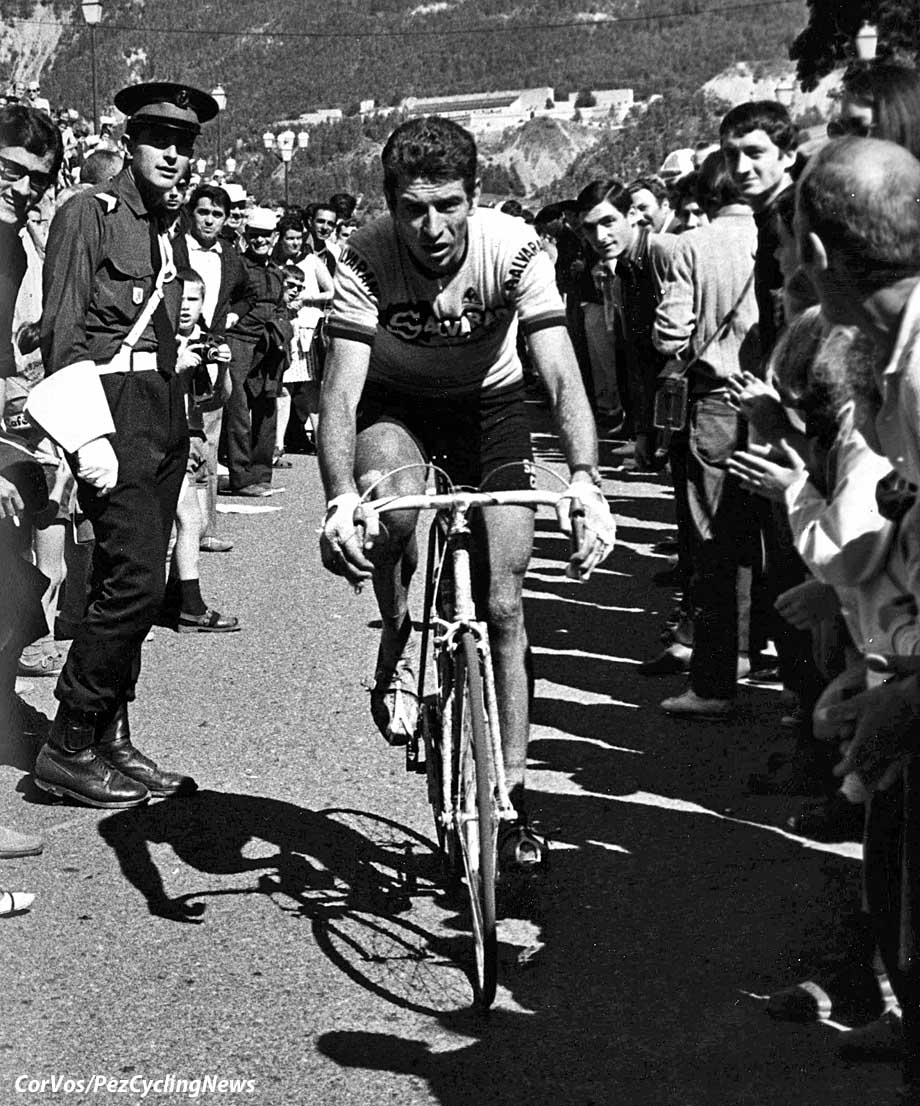 The end of year time trial ‘mini-season’ saw him win the GP des Nations and the now defunct but once major GP Lugano time test. The 1968 season saw him become only the second man, after ‘Maitre Jacques’ Anquetil, to win all three Grand Tours as the Vuelta fell to him, as did his National Championships, the Grand Prix des Nations again and with aforementioned ‘Chrono King,’ Anquetil, the beautiful Trofeo Baracchi.

A year later in 1969 he added another Giro title and the Tour of Romandie; 1970 was a little leaner but yielding stages in Tirreno-Adriatico and the Tour of Switzerland not to mention a Worlds podium in Leicester behind the late, great Jempi Monsere. There were Giro stages and Piemonte in 1971 with 1972 seeing him win the Tour of Catalonia and his National Championship. 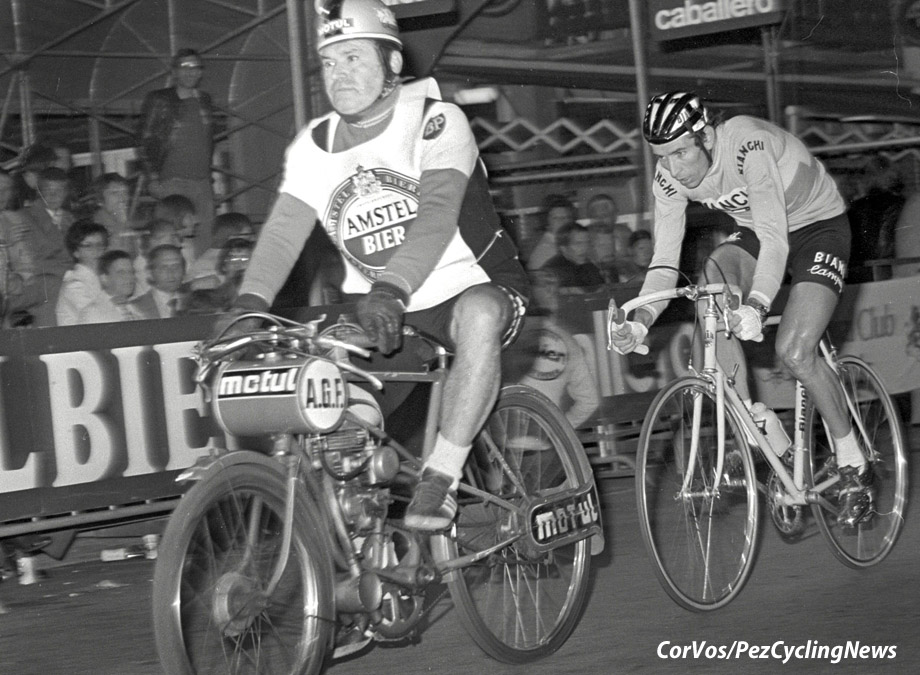 The 1973 season saw in the celeste colours of Bianchi with whom he would ride until the end of his career in 1979. It was among his best, taking the world title in Barcelona ahead of Maertens, Merckx and Ocaña; as well as Piemonte, Lombardy and the Baraccchi with 2019 Tour winner Egan Bernal’s countryman, ‘Cochise’ Rodriguez. The Primavera victory I mentioned above opened 1974 and he won the Coppa Agostoni – among these major victories there was a huge number of wins in ‘lesser’ Italian races and podium places all over Europe – versatile though he was, his sprint was not the strongest among a generation of extremely fast finishing men.

There was a Tour stage in 1975 and a whole raft of placings before the 1976 season when he won his third Giro and another Paris-Brussels. His very best years were now behind him but he was still hugely popular in his home land and 1977 saw numerous wins in Italy including the Milan Six day with Rik Van Linden.

There were wins in Switzerland and Italy in 1978 not to mention a flurry of podium places. His last listed result is third in the Milan Six Day in early 1979 paired with ‘Flemish Arrow,’ the late, great Patrick Sercu. 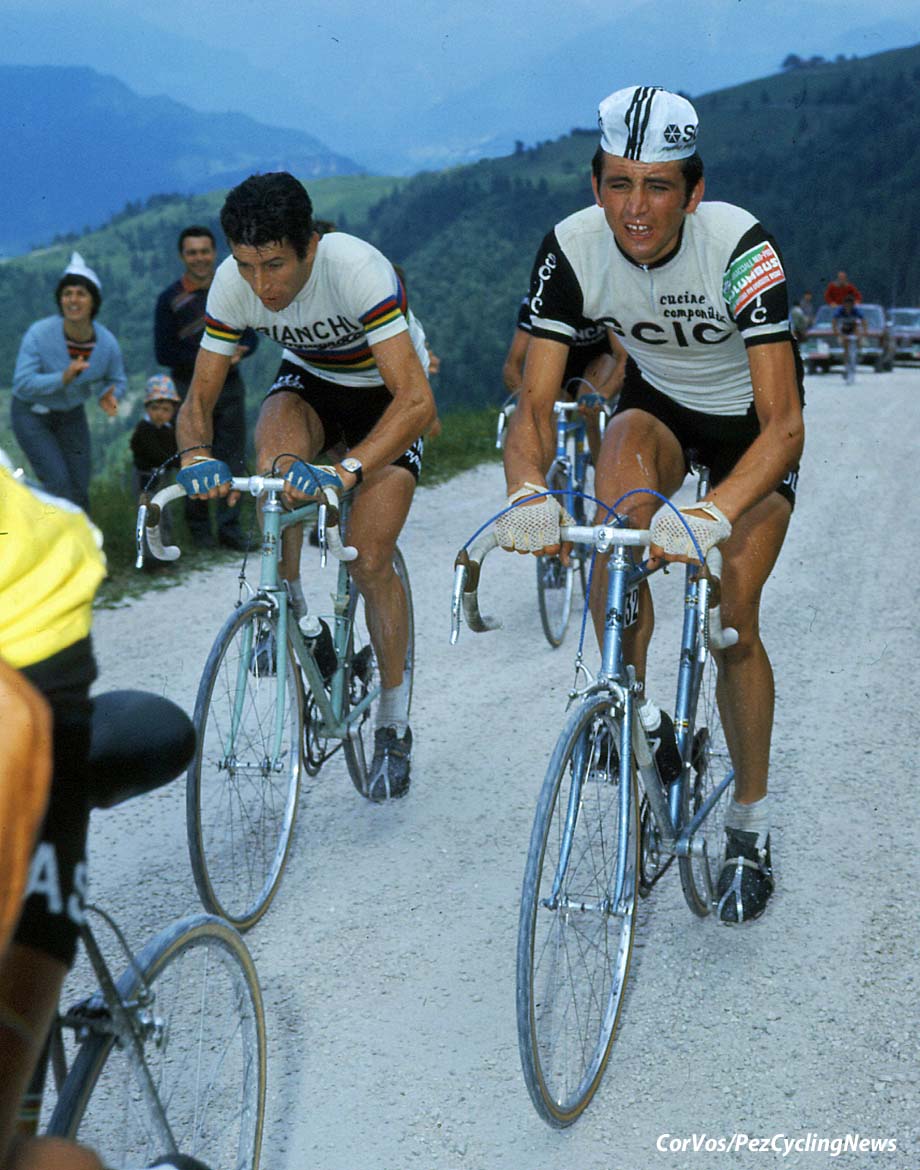 There was always speculation about what Gimondi would have won had his career not overlapped that of Eddy Merckx and his ruthless appetite for victory. The man himself wasted little time on such speculation, happy with his beautiful career and palmarès.

After retiring from the sport Gimondi ran an insurance business in Bergamo and was a perennial ambassador for Bianchi, the bike with which he is best remembered. The Salvarani team having ridden Chiorda frames.

The meticulous ‘Cycleranking.com’ website places him ninth in all time pantheon of great cyclists – the list based on results – has Merckx at the top with Gimondi one place behind Roger De Vlaeminck and one place ahead of Bernard Hinault. 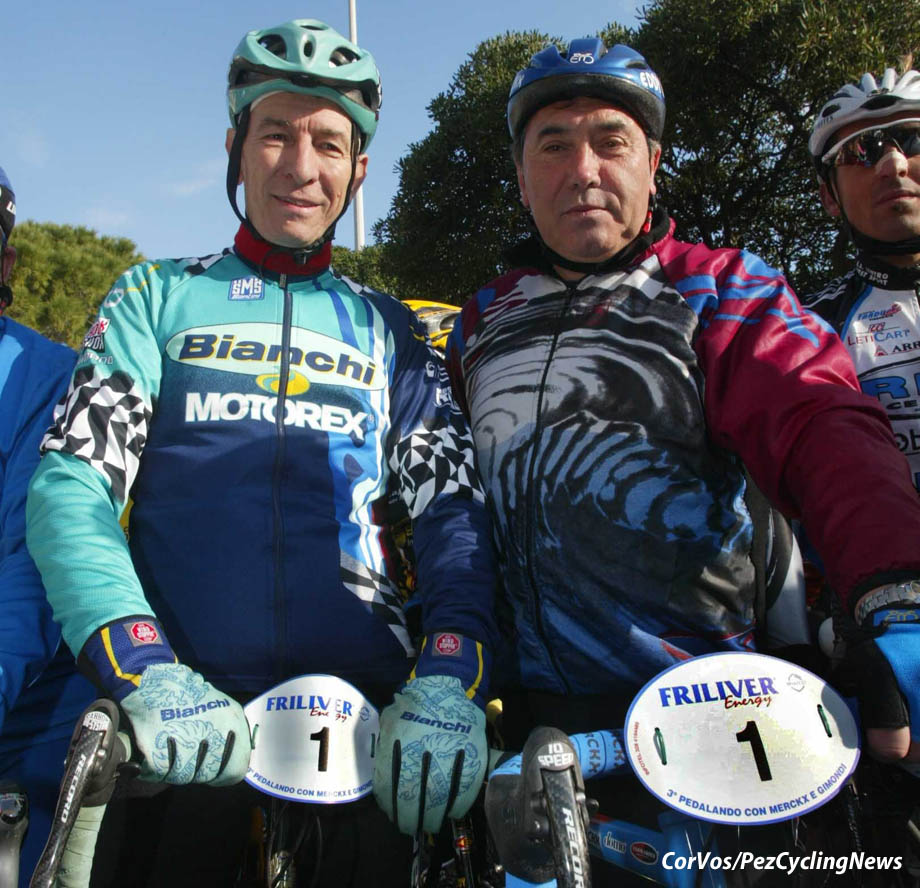 And that same great Eddy Merckx had this to say of his old rival; “Felice was first and foremost a great man, a great champion, unfortunately he has been taken away. It is a great loss for cycling. All the struggles we had together come to mind… A man like Gimondi is not born every day, a part of my life goes with him. He was one of the best in history.” 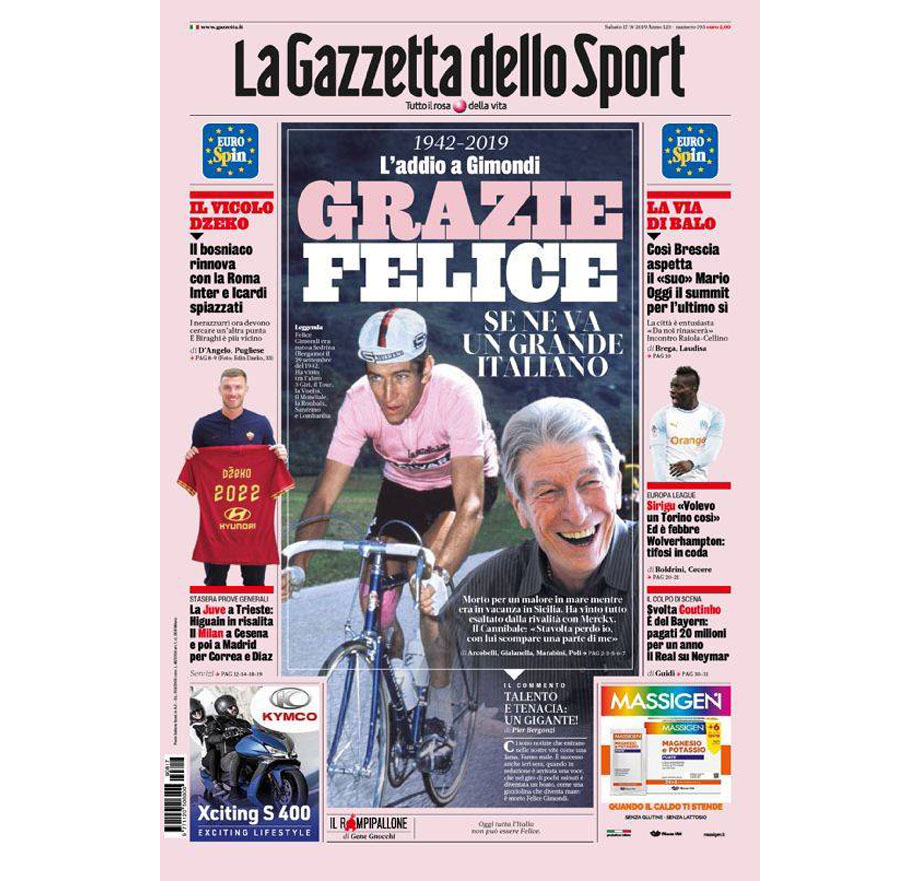