Stage Report: Peter Sagan (Bora-Hansgrohe) won the fifth stage of the Tour de France in Colmar. The triple World champion was the fastest in the sprint from a peloton thinned by the climbs of the day. Wout van Aert (Jumbo-Visma) finished in second place, with European champion Matteo Trentin (Mitchelton-Scott) in third. Julian Alaphilippe (Deceuninck – Quick-Step) was 10th and retained the yellow jersey with 14 seconds on Van Aert. 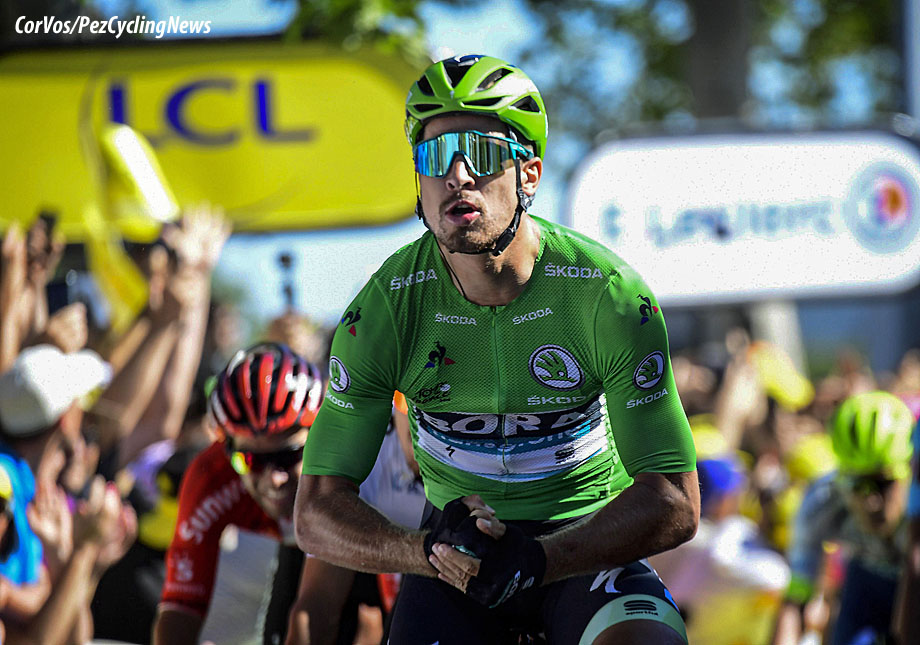 Peter Sagan showed the Sagan of previous year with a stunning win on a hilly day that saw off the pure sprinters. Sagan has set his sights on that green jersey and looks to have the form. 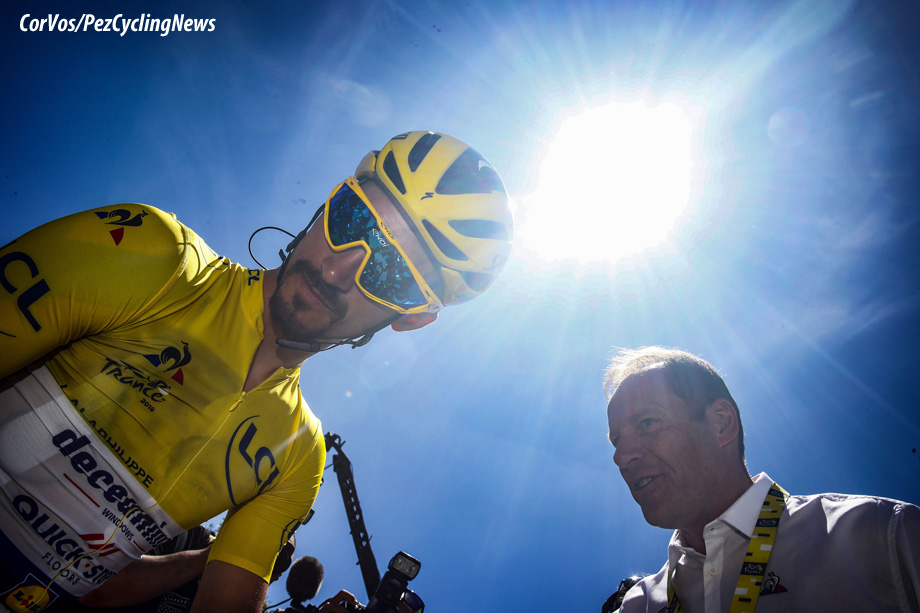 Stage 5 Route:
A hard stage of 175.5 kilometres, with not much flat road, apart from the final 10 kilometres. Four categorised climbs; two Cat. 2 and two Cat. 3, the last summit, the Côte des Cinq Châteaux (Cat. 3), comes with 20 kilometres to go. The pure sprinters shouldn’t be at the finish, but if Peter Sagan is on form he could hang on. The finish town of Colmar is being visited for the 8th time by the Tour. 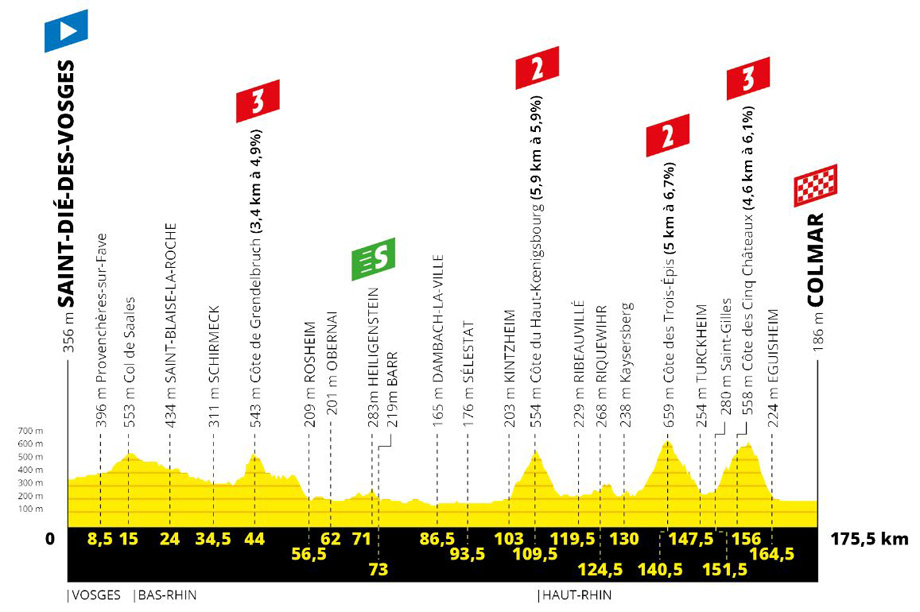 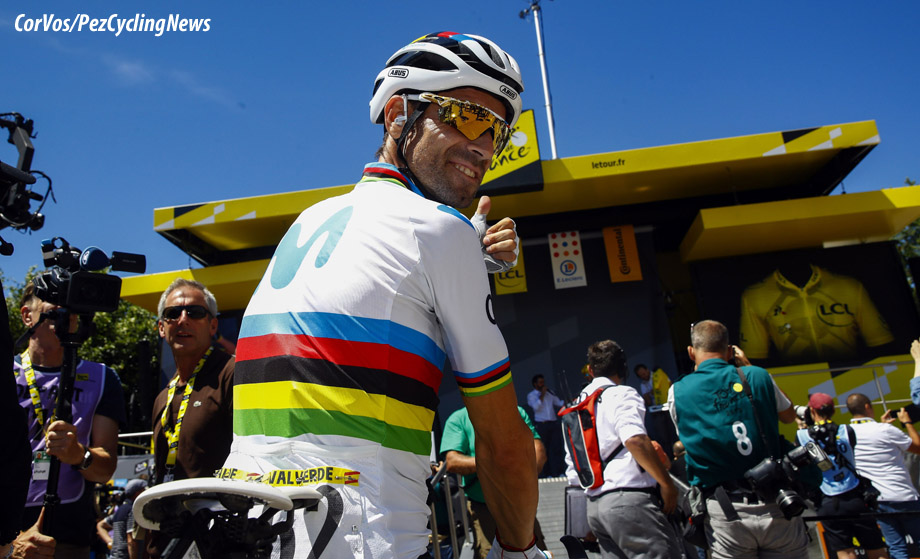 Maybe a good day for the World champion – Alejandro Valverde 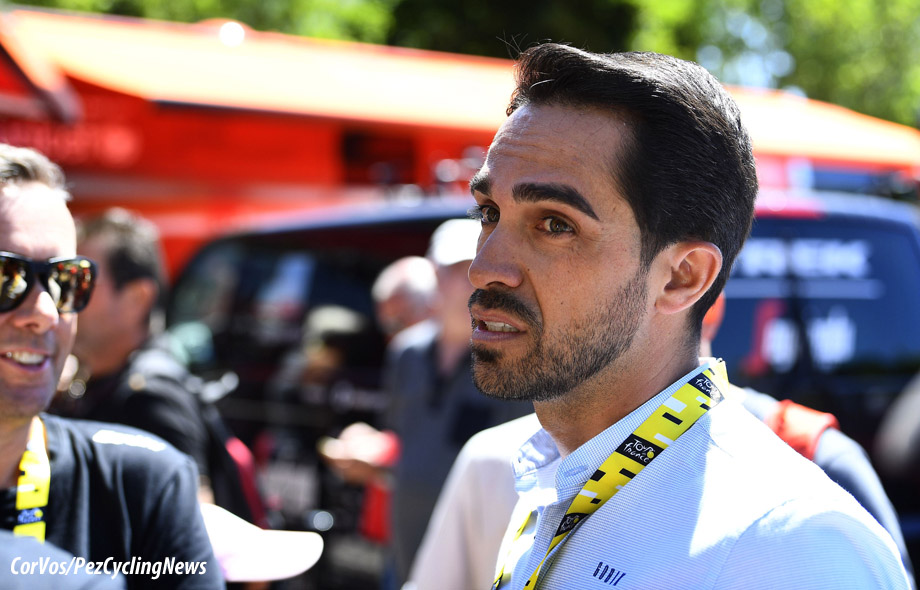 Alberto Contador is at the Tour working for EuroSport España

Lotto Soudal immediately on the attack
Thomas De Gendt immediately hit the gas pedal. Lotto Soudal and EF Education First wanted to have a rider in the break of the day. De Gendt’s move failed, but eventually four riders stayed away. Polka jersey wearer, Tim Wellens was joined by Simon Clarke, Toms Skujiņš (Trek-Segafredo) and Mads Würtz Schmidt (Katusha-Alpecin). Clarke was the best overall at 5:04. After 28 kilometres they had 2 minutes on the peloton. 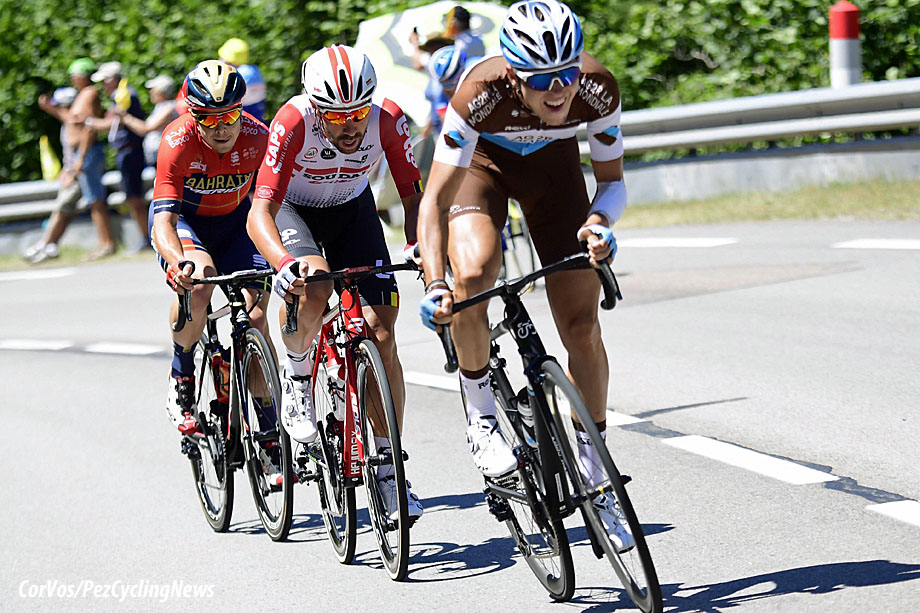 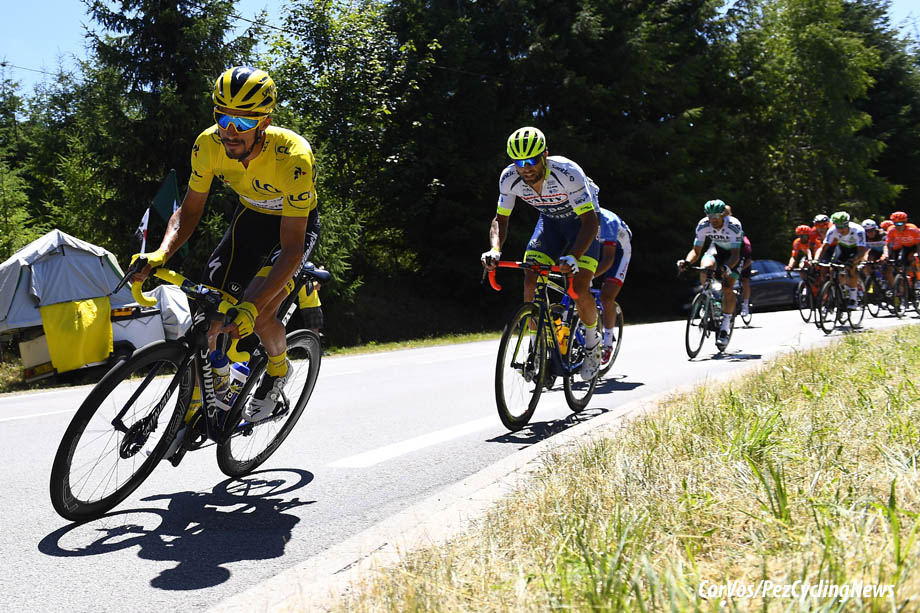 The yellow jersey was active early in the stage

Wellens could have had his sights on the stage victory, but also wanted to add to his polka dot jersey. On the Grendelbruch climb, the Lotto Soudal man was the first to cross the top for 2 points. Clarke won the intermediate sprint after 27 kilometres. Behind; Elia Viviani beat Peter Sagan and Michael Matthews in the peloton. 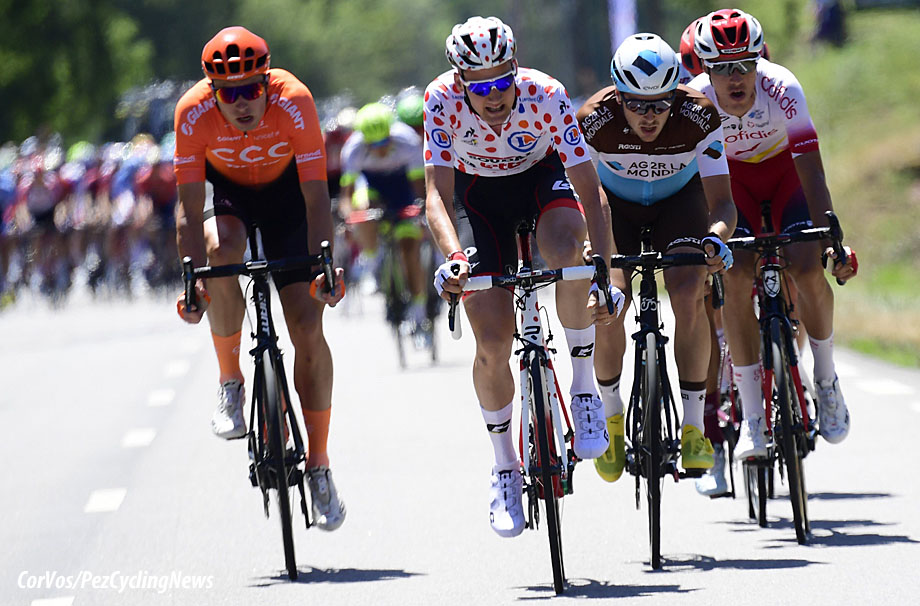 Tim Wellens wanted more KOM points, so had to be in the break

The peloton kept the time difference to about 2 minutes. Bora-Hansgrohe, Deceuninck – Quick-Step and Sunweb kept the escape within reach. On the Côte du Haut-Koenigsbourg the lead was 2:19, again Wellens was first and Skujiņš second, without a fight. 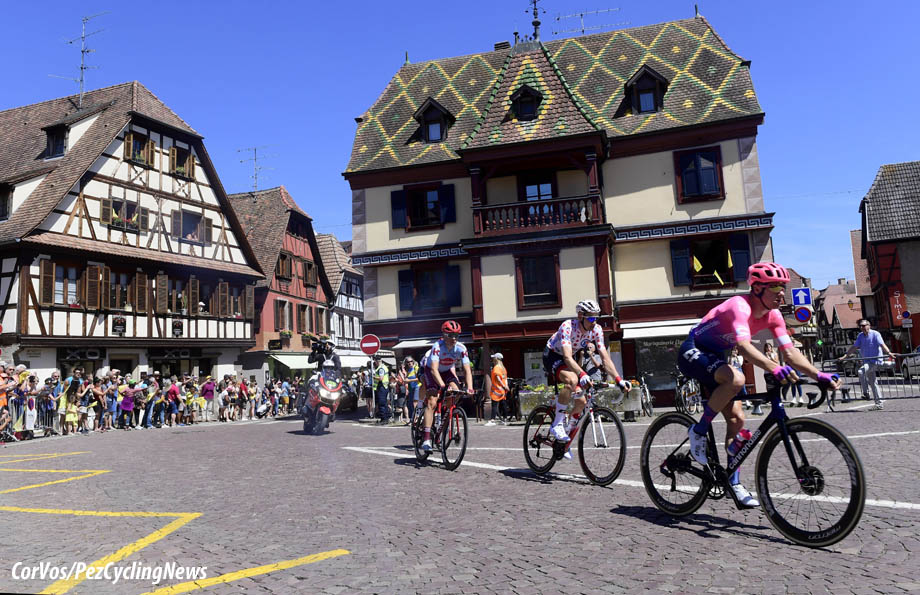 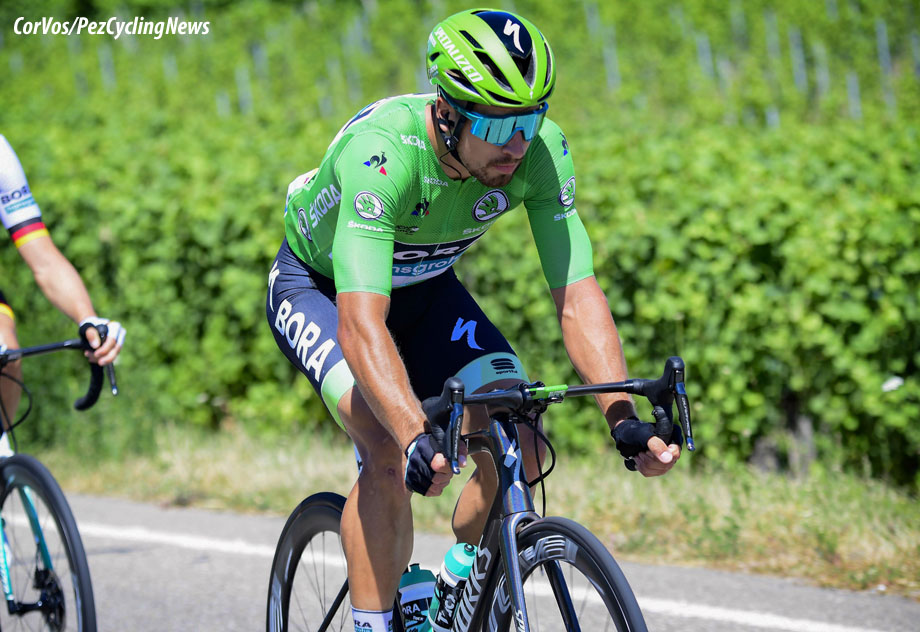 Peter Sagan kept his powder dry for the finalé 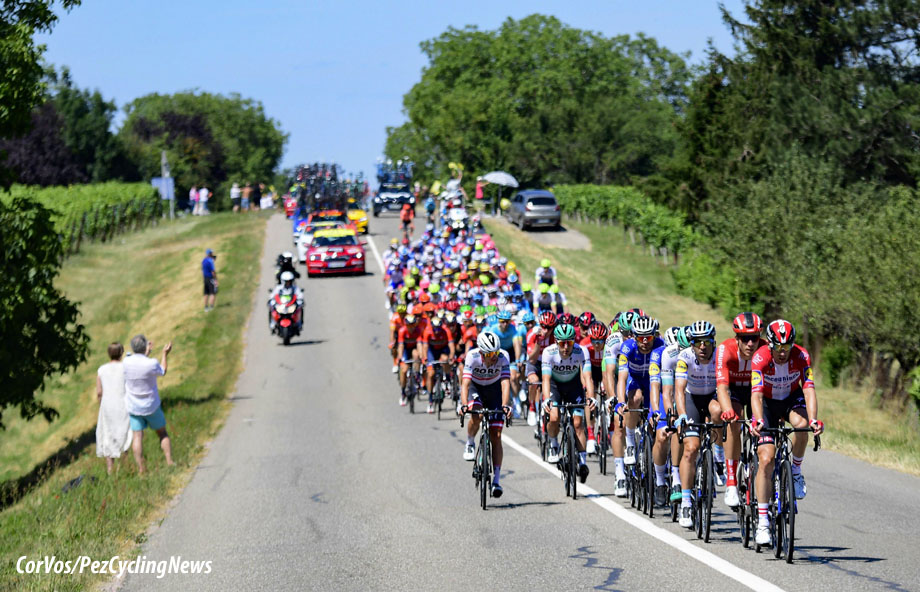 Michael Mørkøv at work at the front of the peloton

The leading group splits
On the climb of the Côte des Trois-Épis, the most difficult of the day, the lead was reduced to a 1:30 and Würtz Schmidt was dropped. Skujiņš attacked Clarke and Wellens 2 kilometres from the summit to go solo. The Latvian champion was first over the top for the mountain points in the village of Trois-Épis. 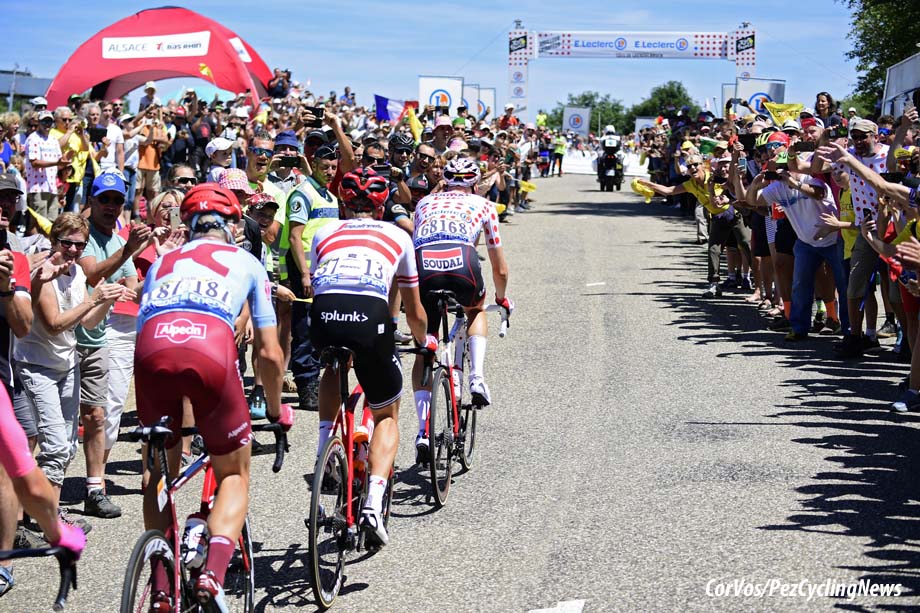 KOM points – What Wellens was here for 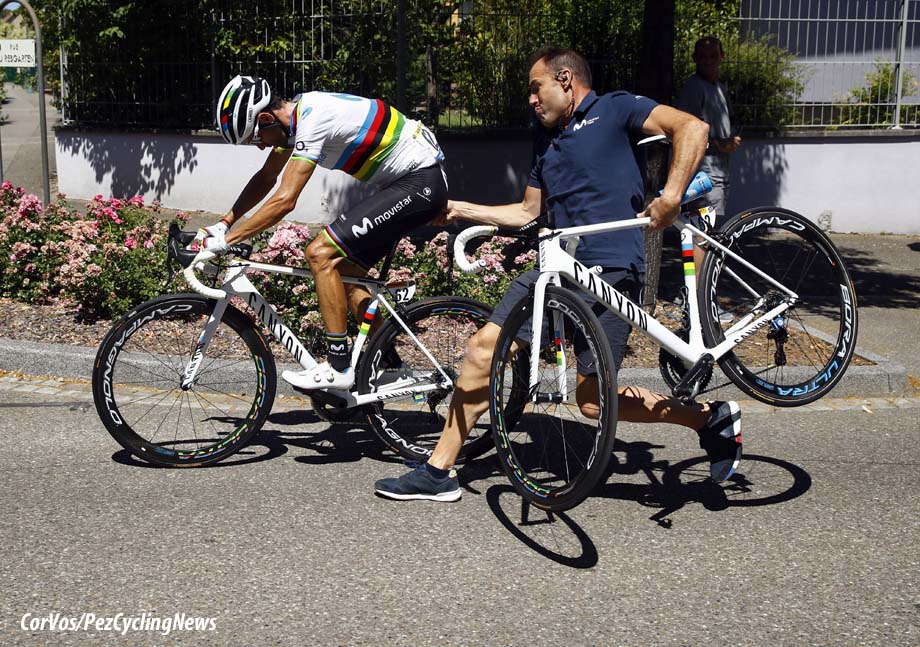 The time differences were small on the descent to Turckheim and the now thinned peloton was only at 50 seconds. Skujiņš made himself as aerodynamic as possible, to take back some time. But the men of Peter Sagan and Michael Matthews set the pace in the chase. It was clear that the sprinters who had a sprint had set their sights on the stage victory. 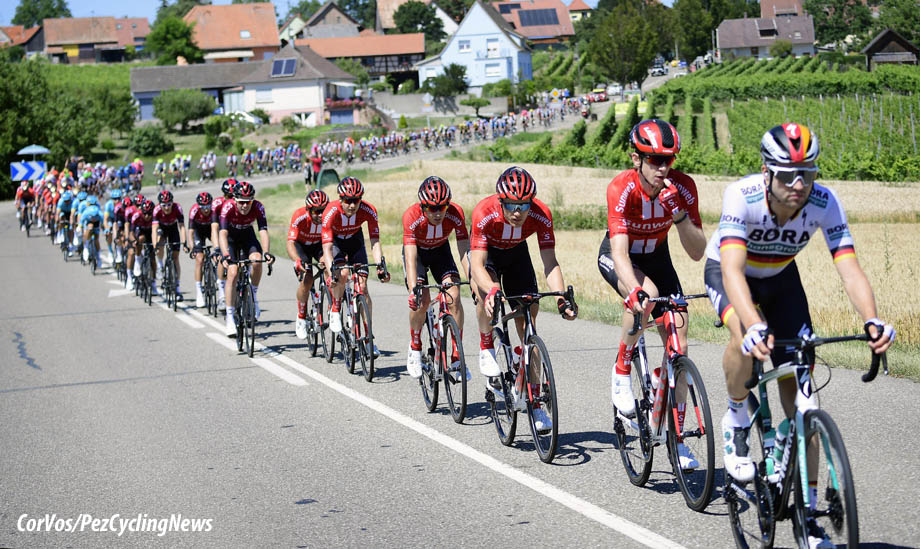 Bora-Hansgrohe and Sunweb took over the peloton work 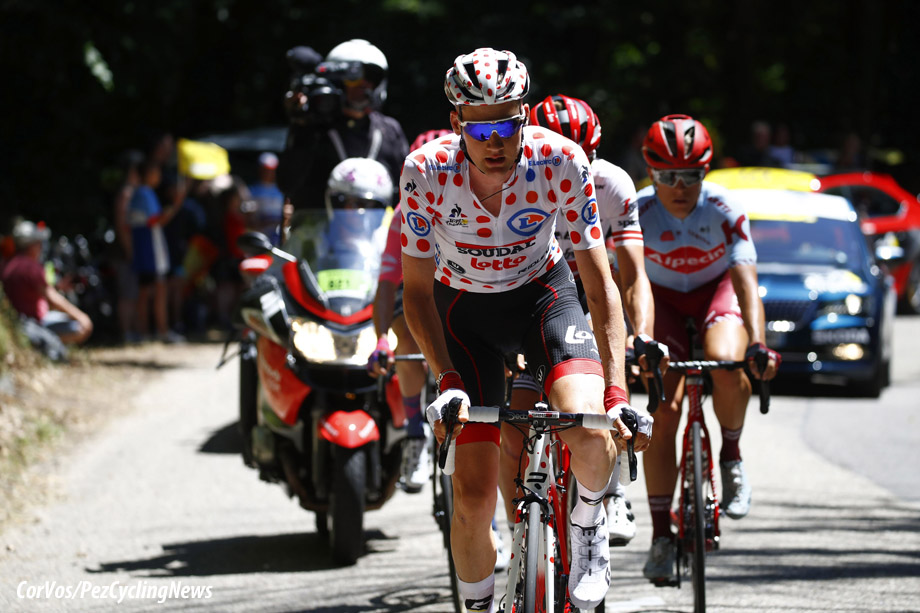 Wellens was attacked by Skujins on the penultimate climb

Although Skujiņš was holding them off, in the end he had to accept the power of the peloton on the Côte des Cinq Châteaux. He was caught 3 kilometres before the top. At the back of the pack Lilian Calmejane and Ilnur Zakarin, among others, were in trouble, while Edvald Boasson Hagen had to deal with mechanical.

Skujiņš went solo, but he had no chance 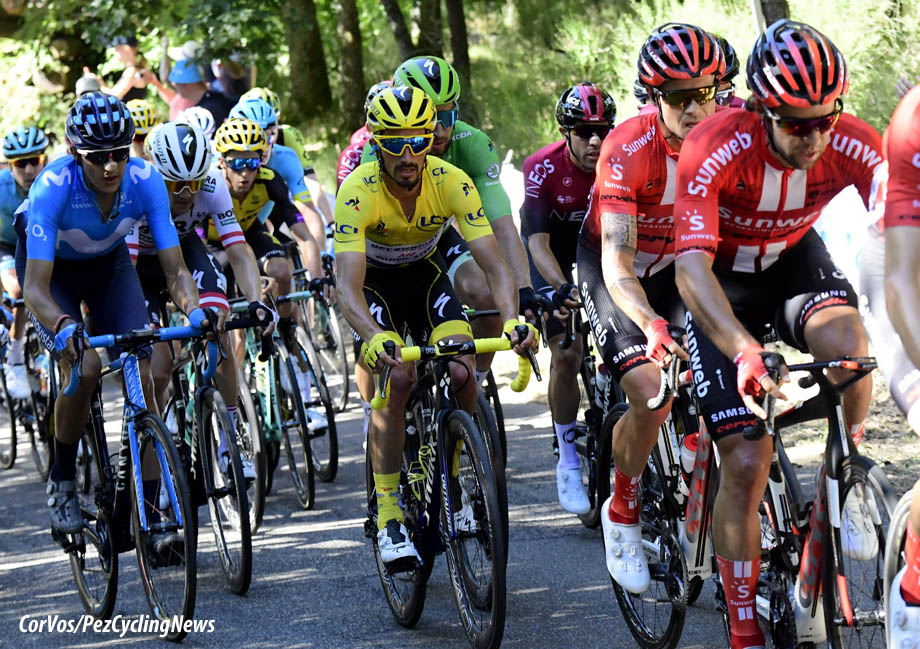 Fast train to Colmar
At the top of the Côte des Cinq Châteaux, Xandro Meurisse was the first, just ahead of the main group with just under 20 kilometre to the finish. In Eguisheim, 12 kilometres out, Julian Alaphilippe also moved forward. The yellow jersey has a good a sprint. Rui Costa attacked the peloton at 7.5 kilometres from the finish. 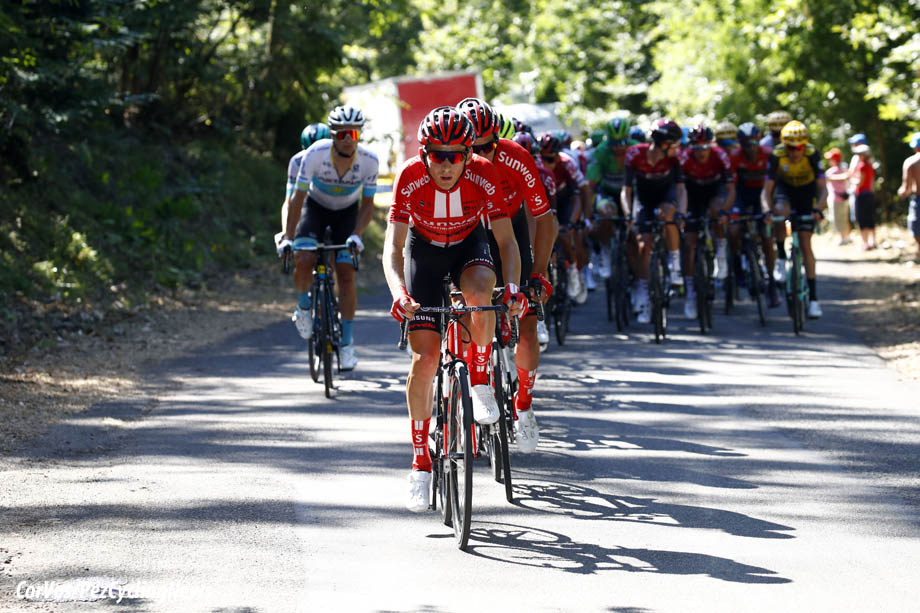 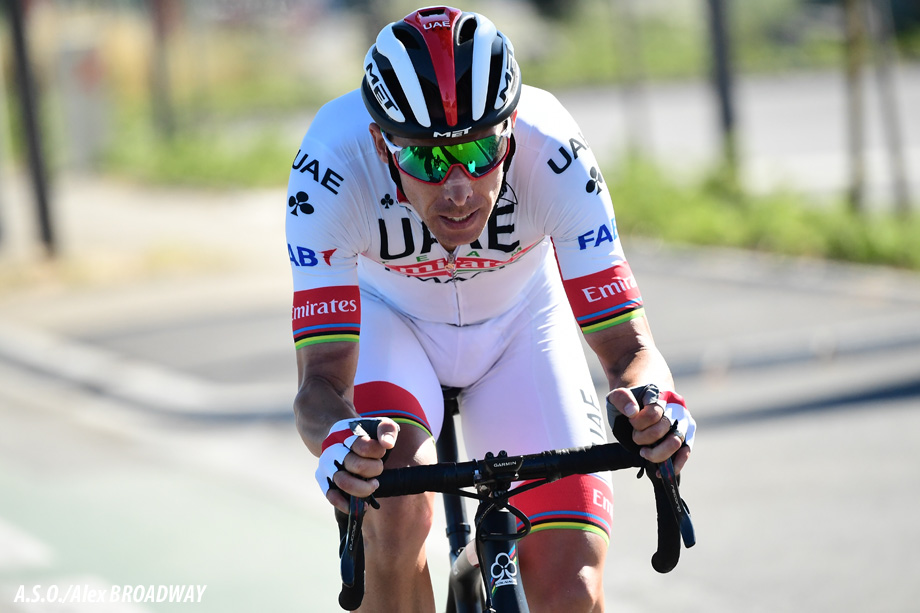 A bold move from Rui Costa

As the race got closer to the finish line, Costa looked back more often. Behind him, the sprint trains had started their work. The Portuguese ex-World champion was caught and the battle was up to the men of Sunweb and Bora-Hansgrohe. Jumbo-Visma were also in the mix for Wout van Aert. Daryl Impey opened the sprint for Matteo Trentin, but it was Peter Sagan who rewarded the Bora teamwork. Wout van Aert stayed ahead of Matteo Trentin for second place. 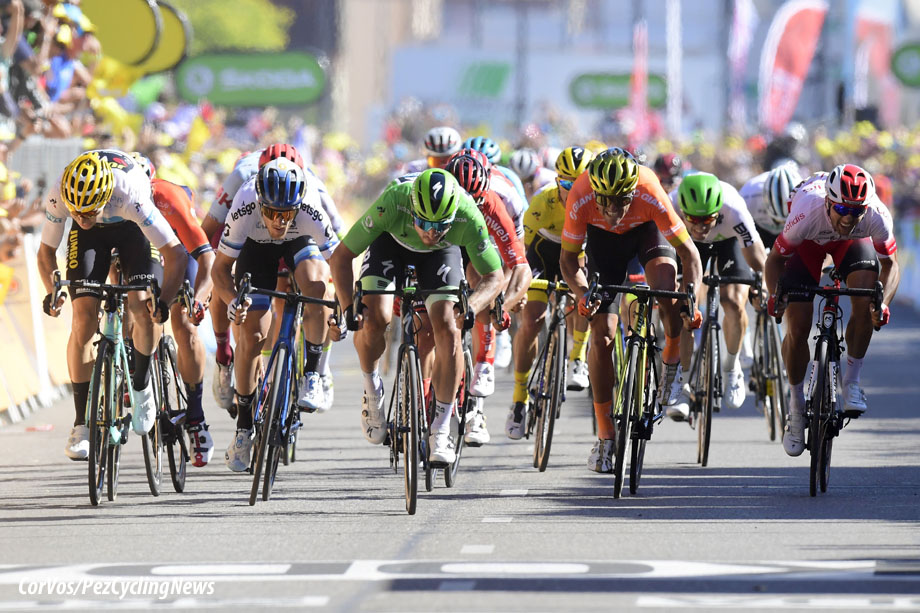 Sagan by a bike length 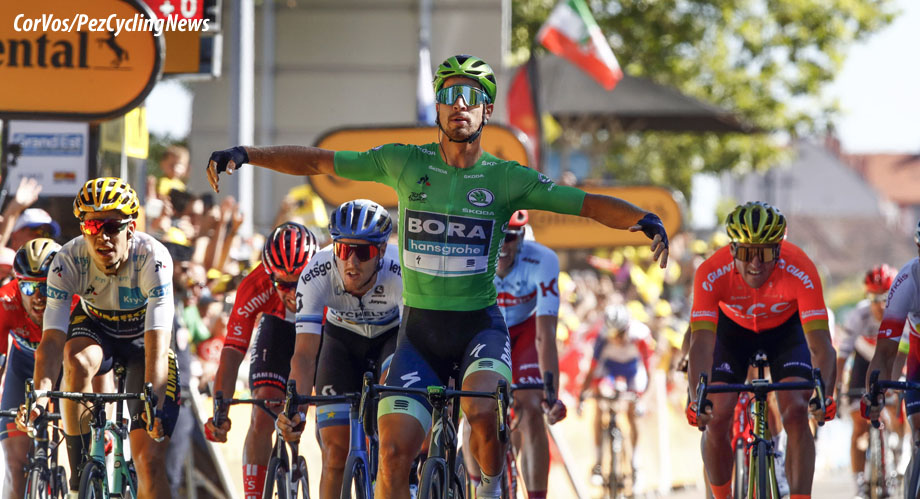 The green jersey is looking good on Sagan’s shoulders

Stage 5 winner and points leader, Peter Sagan (Bora-Hansgrohe): “I just have to ride with passion and the victory comes. I have to say thanks to all my team mates. They have done a great job and finally we have the Tour de France victory that we were looking for. It’s very nice for us. We controlled all day, on the flat part and towards the finish. I did my best. Everyone needs good luck and a good day for winning.” 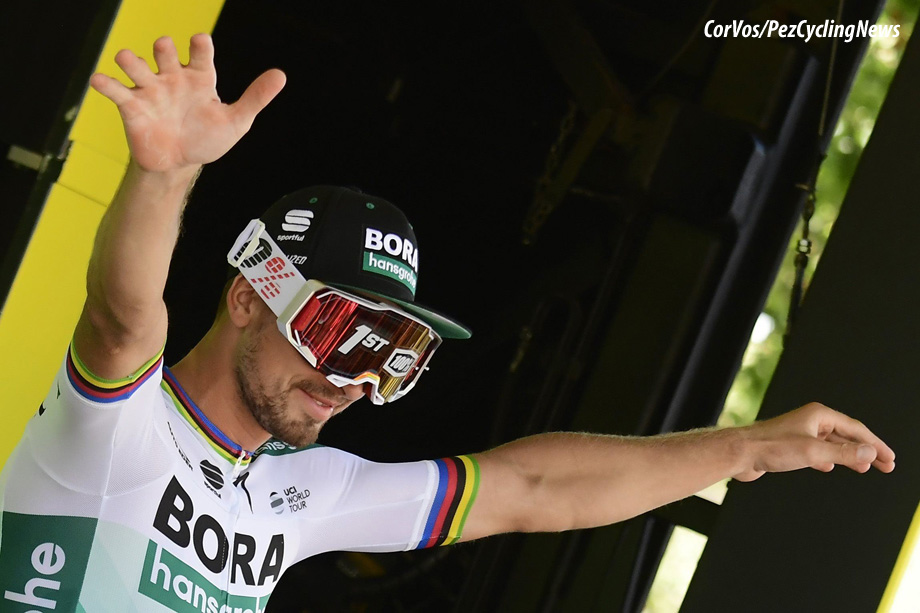