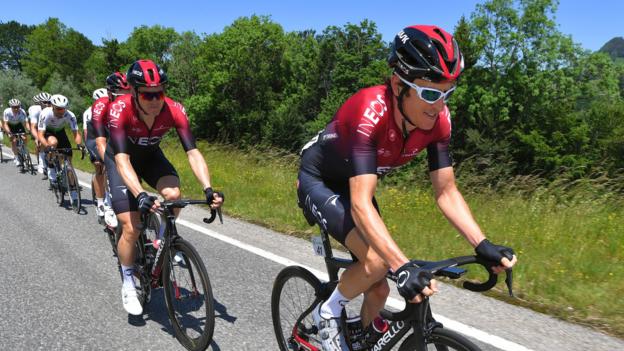 Chris Froome is not selected after fracturing his femur, elbow and ribs in a high-speed crash earlier this month.

Thomas said he was “lucky to escape serious injury” in a crash on 19 June.

The 33-year old, who became the first Welshman to win the race in 2018, said he thought the chance to defend his Tour de France title was over after a bad crash at the Tour of Switzerland.

His teammate Bernal is in better form, and heads into the race after triumphing at the Tour de Suisse.

Thomas says he is excited about returning to the race and has no issue being named as a joint leader.

“Winning the Tour de France last year was the highlight of my professional cycling career and racing with the number one on my back is going to be special this year,” he said.

“The memories of 2018 will remain with me forever, but now I’m ready to create more with the team this year.

“It’s no secret my build-up has been affected by the crash at Tour de Suisse, but I’ve had a good block of training since and I feel ready.

“Discussing with the team, we believe it makes sense to go into the race with joint leaders as it gives us more options. Egan and I will work hard for each other and the team over the three weeks of the race.

“We’ve got a really exciting blend of youth and experience in the team.”

Bernal will compete in the Tour de France for the second time.

“I have really good memories from last year,” he said. “It was my first Tour de France so it was special. We enjoyed a great victory with G and it was something really special to be a part of. Of course, our ambition is to win the race again this year.”

“There is always a strong sense of anticipation before any Tour, but this one is that bit more special for us as it’s our first racing as Team INEOS,” he said.

“And whilst our preparation hasn’t been straightforward following Chris Froome’s recent crash, we will be at the start line with a really strong team that is hungry to win again.

“After the success of last year, we have decided to come into the race with joint leaders. Geraint and Egan are both in great form. They trust each other and we believe that this approach will best suit us as a team by giving us the greatest flexibility on the road and the best possible chance of success.

“Alongside them, we have five of the riders who supported Geraint in his victory last year.”