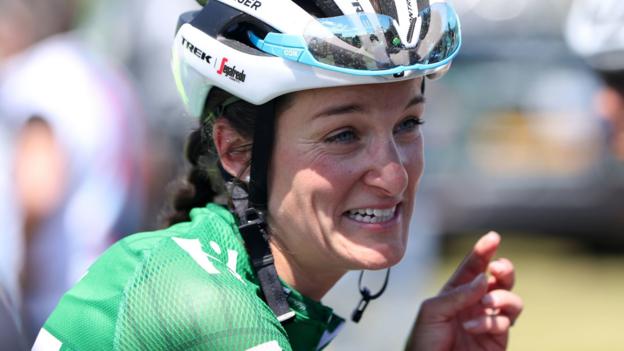 Britain’s Lizzie Deignan has been crowned 2019 Women’s Tour champion to become the first cyclist to win the event twice.

Deignan, 30, finished safely in the pack as the Netherlands’ Amy Pieters won the sixth and final stage from Carmarthen to Pembrey Country Park.

She won the event by just two seconds from Poland’s Kasia Niewiadoma.

It is Deignan’s first title since giving birth to her daughter, Orla, nine months ago.

“It means a huge amount,” Deignan said. “I think the last time I came here I was probably one of the favourites to win the race and this time I wasn’t a favourite, so it was a different experience.

“It was just grit and determination. I’m away from my daughter for a reason, I’m here to do a job.

“I’ve got a fantastic team around me that I didn’t want to let down.”

The Trek-Segafredo rider, who last won the Women’s Tour in 2016, only returned from maternity leave in April and her winning margin ahead of 2017 champion Niewiadoma is the smallest in the event’s history.

But her eighth-place finish on Saturday saw her extend that lead by a further second.