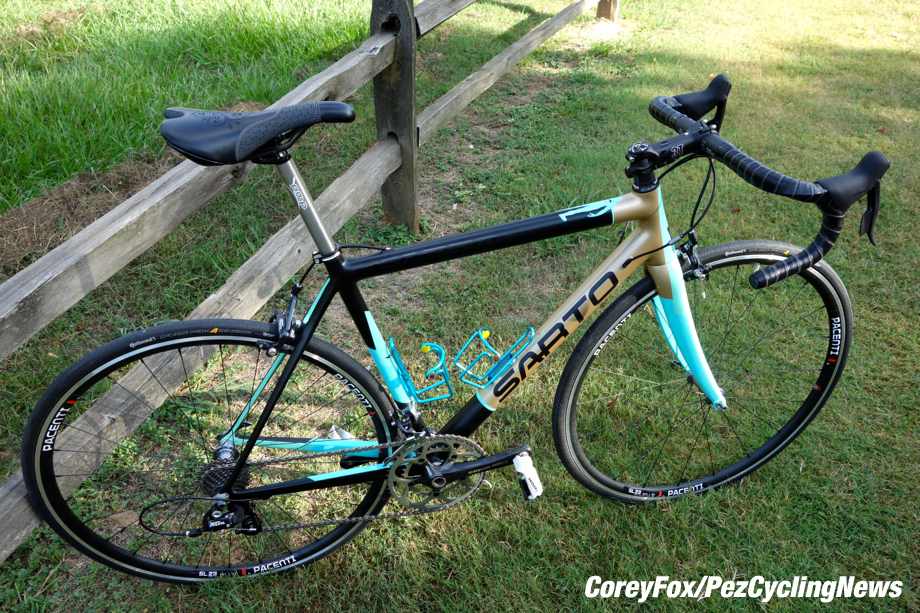 What is it?
A while back, I wrote an article about Enrico and Antonio Sarto – artisan, carbon fiber frame makers located in a small town between Padua and Venice. I was so impressed with their workshop, their craftsmanship and the men themselves that I had them measure me up for their top of the line frame, called the Asola. I wanted to see if their product was as good as their story. The Asolo is a super light, super stiff frame that comes with an equally extreme Columbus Grammo fork. The frame and fork together are only a handful of grams over a kilo, while also being one of the stiffest offered in their catalogue. 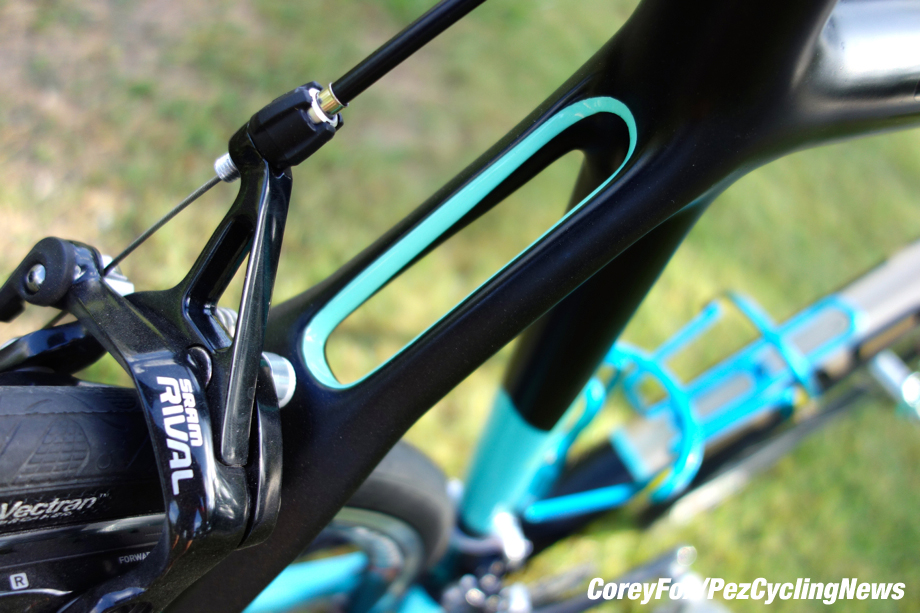 So the geometry is custom, tell us a little about your choice?
Actually, my measurements came so close to their stock M size that I decided to just go ahead with that. I find that it’s more informative, from a journalistic point of view, to see how builders feel their bikes should handle. 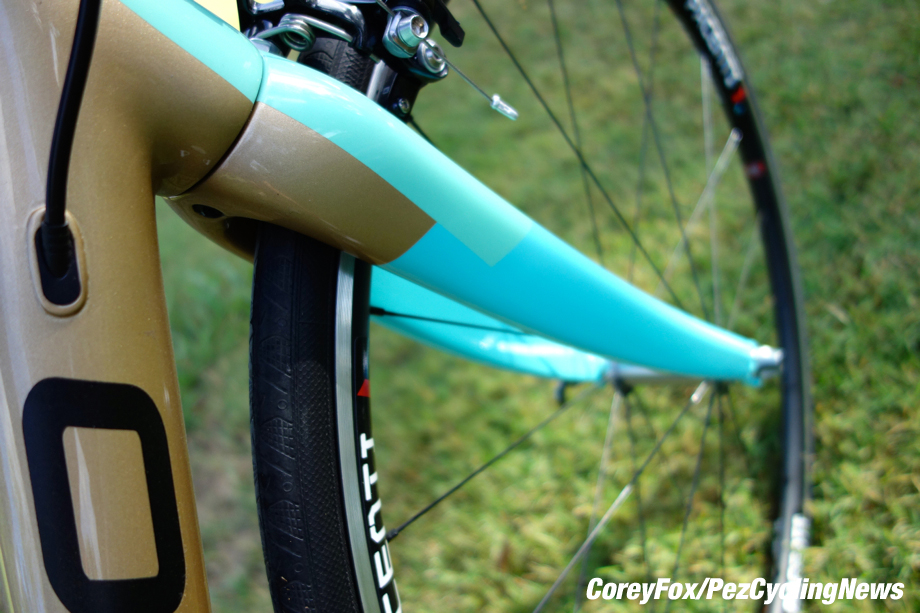 And?
In a word: Surprising. I thought that I was going to get a nervous, stiff, unforgiving race thoroughbred. Far from it, in fact. It has great balance, really great. Of all the bikes I’ve owned and ridden, this one comes the closest to being exactly in the middle between stability and agility. One of the guys at the factory told me that while testing the Asola, he had no problems taking it over 100km/h while descending the Stelvio. At the time I thought this was just Italian machoism, but now that claim seems more than credible, though I have not personally confirmed it. And the stiffness/compliance is more than acceptable, though some of my choices in kit certainly factor into this. 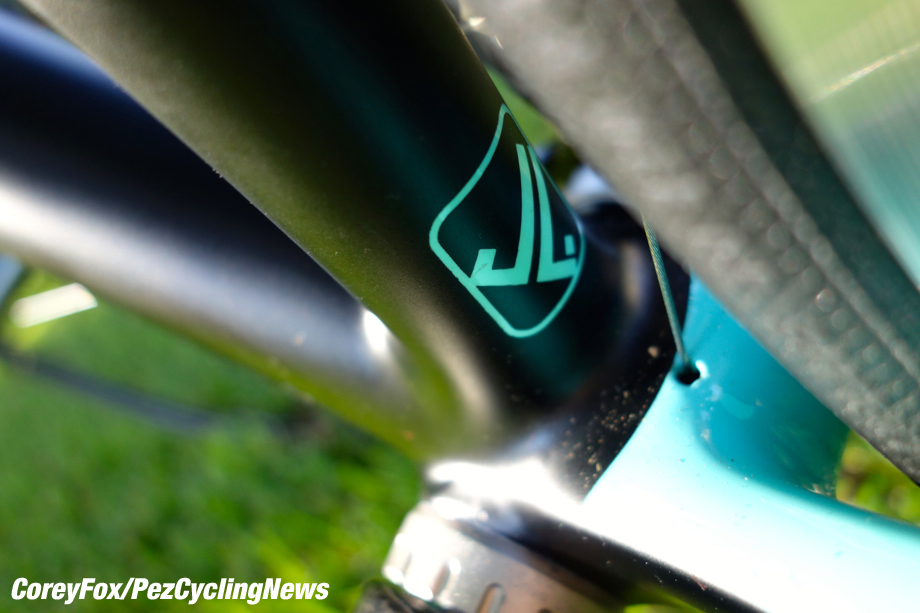 Tee’d up nicely, that kit being…
Let’s start with the wheels, these come personally built-up – and bought directly – from the guys at November. Called the Nimbus, they are 20/28 (front/rear) spoked and laced to alloy, Pacenti rims. The hubs are their own design, made by White Industries. The build quality, lightweight-ness and stiffness are certainly way beyond their entry level pricing. Tires are 25mm fatty, GP 4000 Continentals that get even fatter on the extra wide rims. 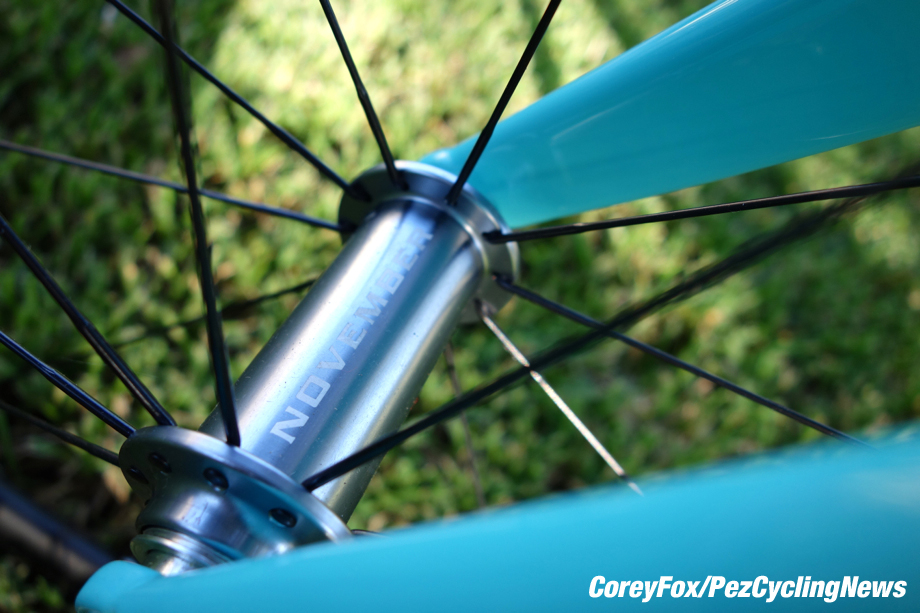 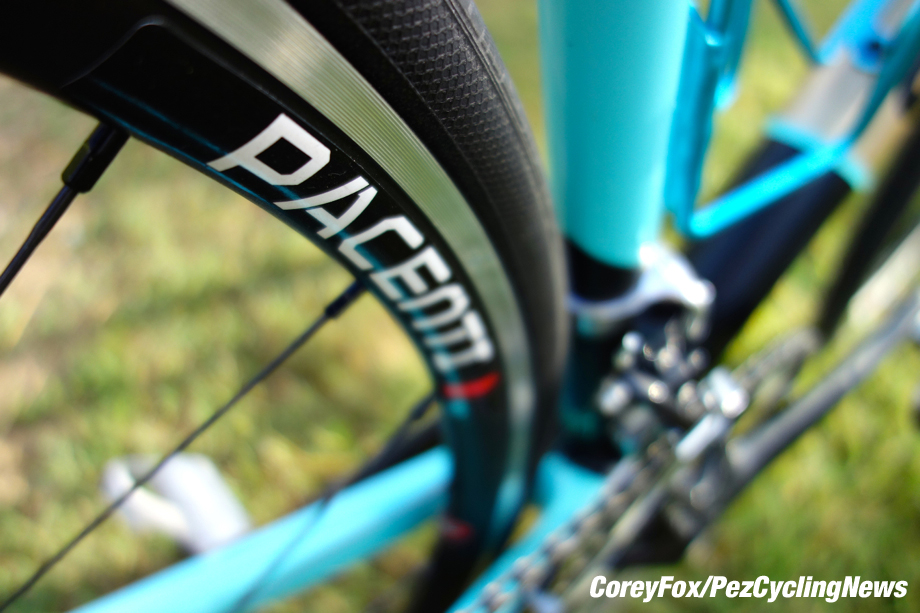 The ARX Team stem and Rotundo Team carbon fiber handlebar both come from 3T. Traditional, round bars are nearly extinct, I’m so glad that 3T still makes these excellent ones. The titanium seatpost is from PMP, no complaints. The gruppo is mostly SRAM Rival, the compact cranks are Force. 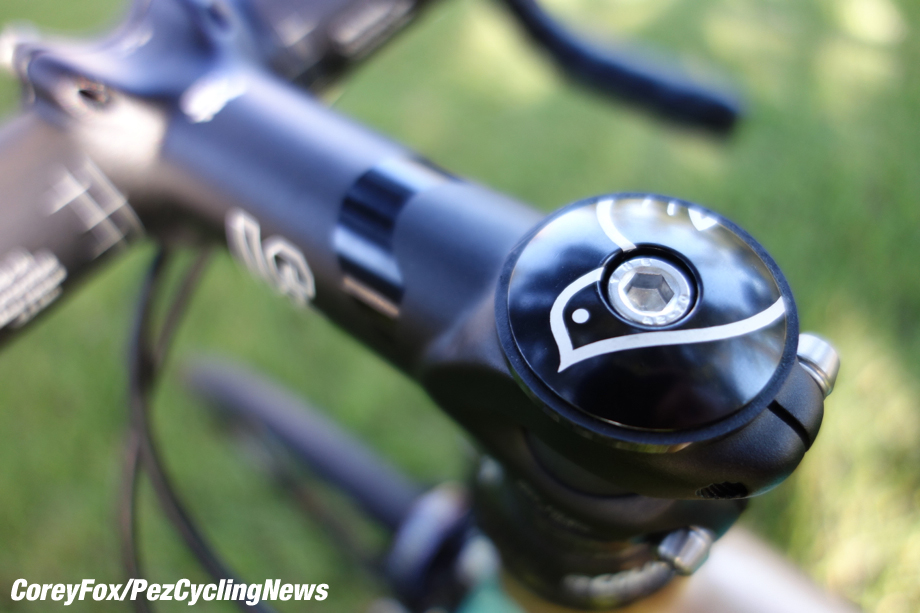 And that saddle?
There is a cool guy in Austin, Texas named Carson Leh, that switched from making shoes to doing saddles. I sent him an old, worn out Aliante and got a wing-tip special in return. The matching leather, bartape is also from Carson. 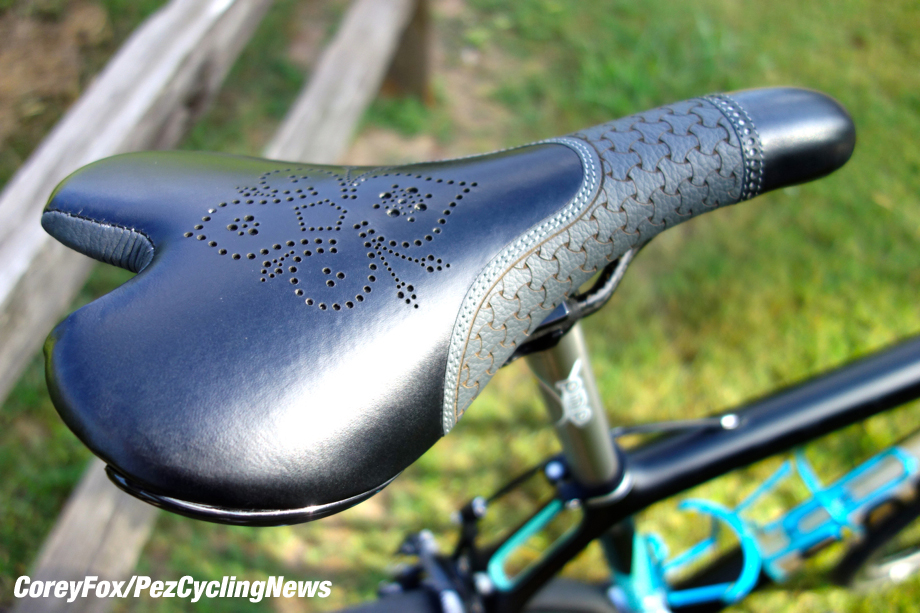 You’re forgetting something colorful, right?
Of course, Jordan Low is the man. He paints for Seven, but also for a few custom builders… and anyone else who sends him their frame and some money. Little wonder, that a bike he painted won the People’s Choice award at NAHBS this past year. The paint scheme/forms are inspired by paintings from a friend of mine, Urban Gruenfelder. The image on the headtube comes from a work entitled “Luckily, Death is in the Bucket.” This kind of black humor is fitting for us cyclists that are out there staying in shape but risking our lives for it at the same time. 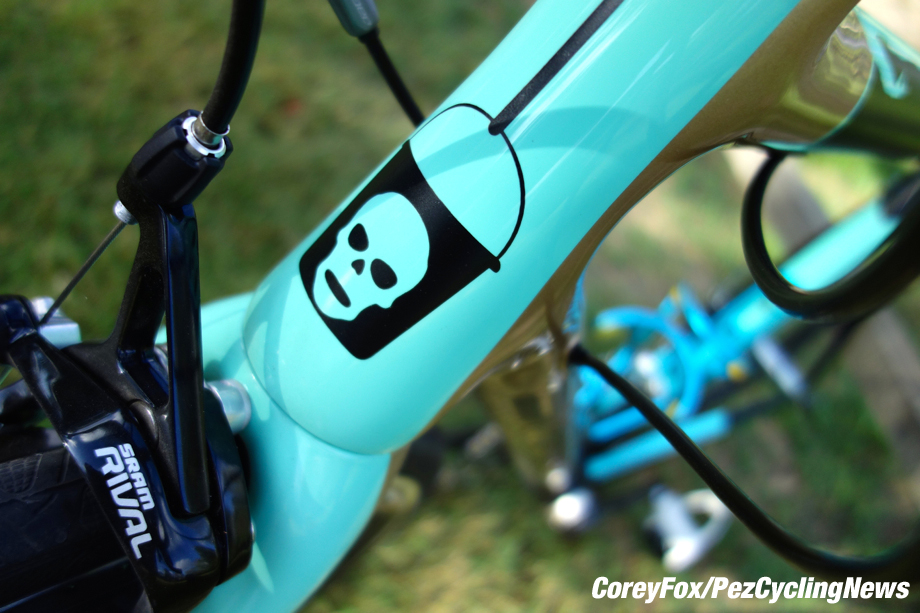 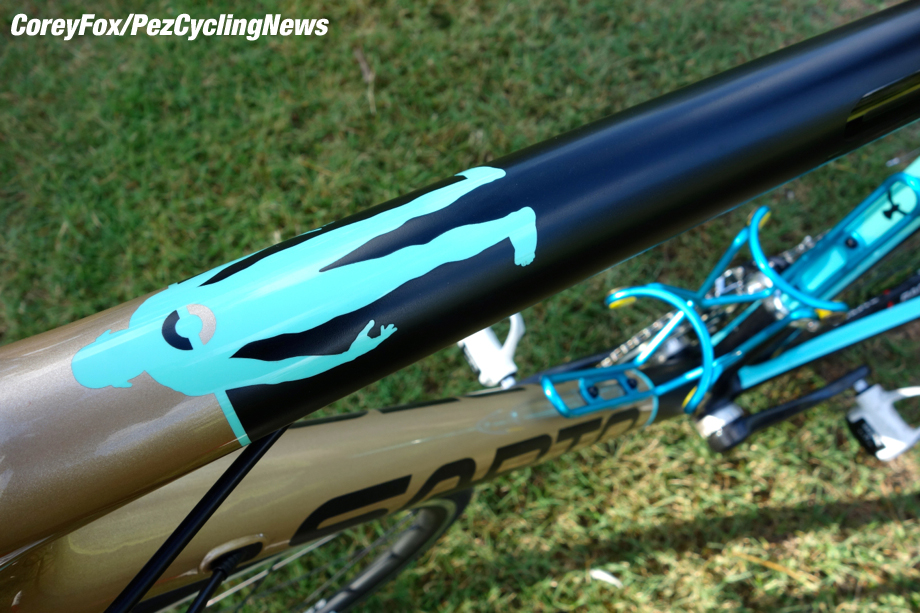 Isn’t it kind of odd seeing a high end frame with entry level stuff on it…
You know that I didn’t write all those CheapOh articles without walking the walk. The frame is a masterpiece and the paint matches. Some things are definitely worth splurging on. However, gruppos all work well from the most expensive to the least – and this one just so happened to be given to me by the Publisher here. Wheels are important, but excellent ones are being made and sold direct that can easily compete with expensively marketed ones costing double or even triple. My only CheapOh regret: I wanted to get 3T’s entry level Pro kit because it works flawlessly, it just wasn’t in stock when I needed it. 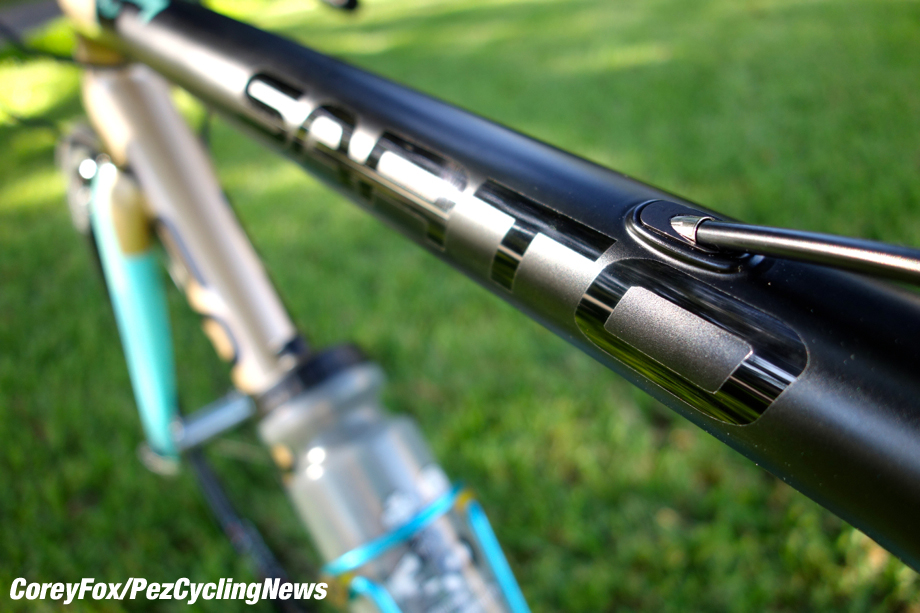 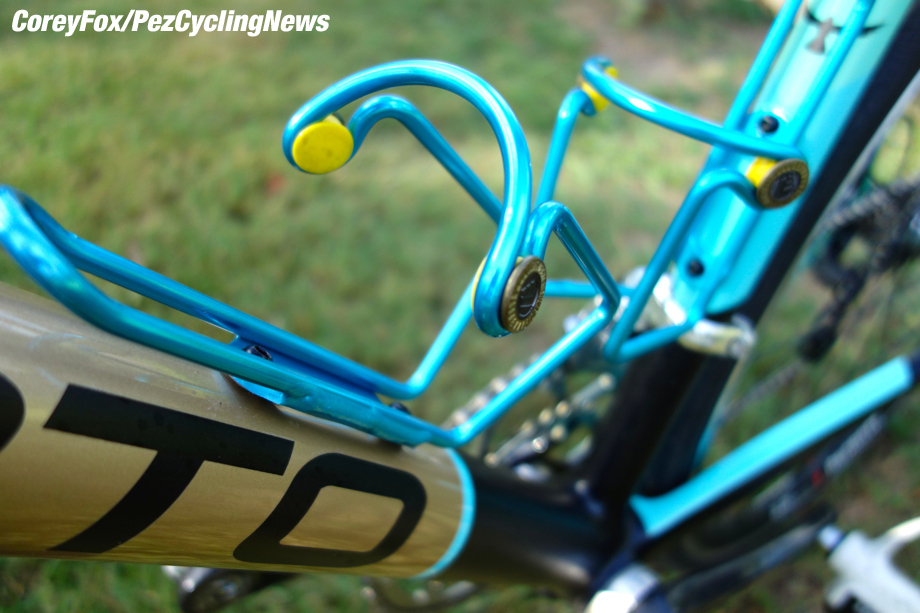 Special thanks go to: November for the wheels. Jordan Low for the special paint job. Carson Leh for the saddle and of course Sarto. 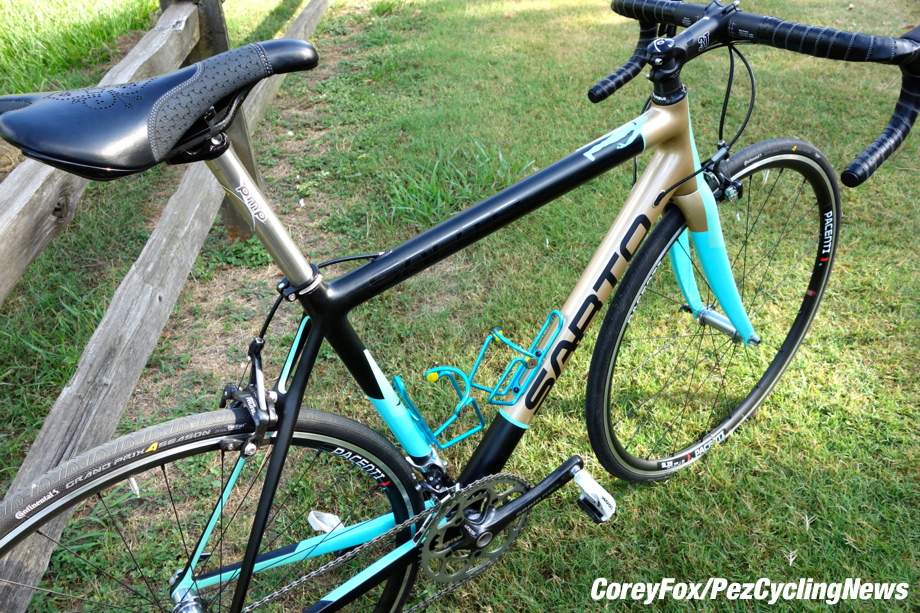 Got a bike that you walk into the room just to stare at? Well how about sharing it with fellow PEZ fans and getting it featured in Readers’ Rigs so we can all stare at it! Send us a Readers’ Rigs submission direct to [email protected] and your bike could be featured in all its glory here on the pages of PEZ.