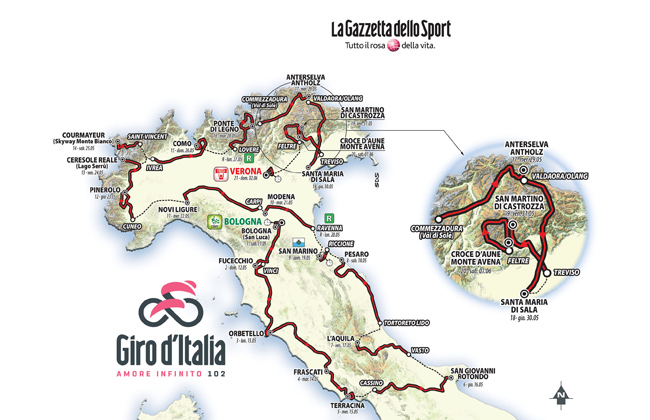 The Big Start from the Emilia-Romagna capital city and the finish in Verona with its ‘traditional’ arrival in the Arena, are both ITTs. The Cima Coppi (highest mountain of the Giro) will be the Gavia Pass at 2,618 metres above sea level; the Mortirolo will be this edition’s Montagna Pantani; and the Bartali stage will be the Bologna-Fucecchio. Homage will be paid to Fausto Coppi in the centenary of his birth with the finish in Novi Ligure and the Cuneo-Pinerolo stage.

A number of important social and cultural references will be made over the 3,518.5km course. With the finish in L’Aquila, the Giro will commemorate ten years since the earthquake that hit the area at 3:32am on 6 April 2009. The Corsa Rosa will remember people and places that have impacted the peninsula’s history including the genius of Leonardo da Vinci – 500 years after his death – and, in Fucecchio, the journalist, writer and historian Indro Montanelli, 110 years from his birth. The finish in Pesaro will celebrate the great composer Gioacchino Rossini. 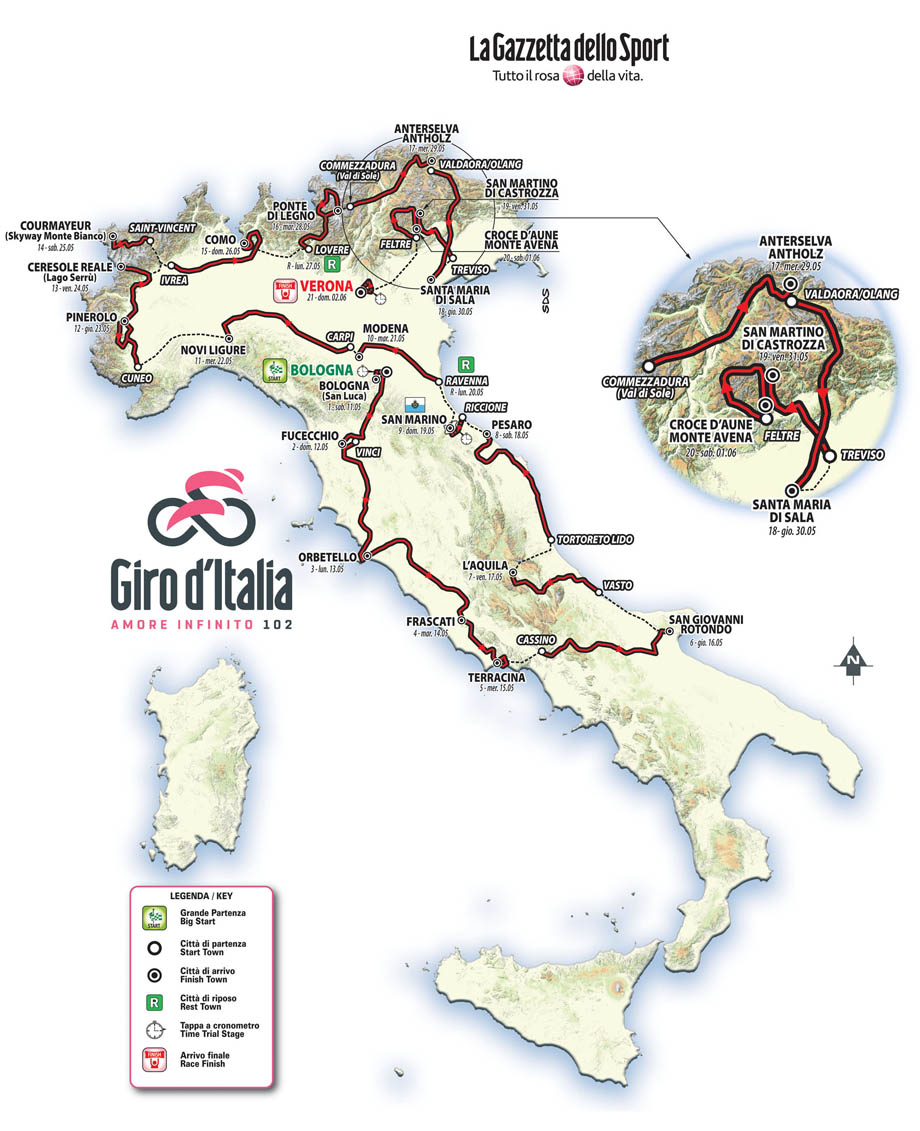 The 2019 edition will be a true ‘Italian Style’ Giro, being competed entirely within Italy, with the exception of a brief visit to the Republic of San Marino on Stage 9. The 102nd edition of the Giro d’Italia – organized by RCS Sport / La Gazzetta dello Sport – will start from Bologna on 11 May and finish in Verona on 2 June. With 3,518.5km of racing packing in 46,500 meters of total elevation, this edition is one of the hardest courses in recent years.

BIG START AND FIRST WEEK
The Emilia-Romagna Region will kick off the 2019 Giro d’Italia. Stage 1 is a short but punchy ITT, with the first 6km flat and the final 2km very steep. After riding through Bologna city centre on wide open roads, the San Luca climb awaits: 2.1km on a 9.7% average inclination with long stretches over 10-12%, peaking at 16% with around 1km to go. Stage 2 also starts in Bologna with a hilly profile. The route runs through the Apennines before descending into Prato and running through the hills surrounding Empoli, ahead of the finish line in Fucecchio. This will be the Bartali Stage, and the day that the Giro will also remember the great journalist Indro Montanelli, celebrating 110 years since his birth.

Honoring the genius of Leonardo da Vinci in the 500th anniversary of his death (2 May 1519), Stage 3 will start from his birthplace and finish in Orbetello – where we see the first opportunity for the sprinters – and from where Stage 4 will start. From Tuscany, and through the Maremma region, Stage 4’s route will reach Lazio and finish in Frascati – slightly uphill finish, ideal for finisseurs. Stage 5, from Frascati to Terracina, is another great chance for the sprinters before the hilly stages in the Central-Southern Apennines. On Thursday 16 May Stage 6 runs from Cassino (on the site of WWII Operation Diadem, which took place 75 years earlier, 11-19 May 1944, during the liberation) to San Giovanni Rotondo in the Gargano National Park, the resting place of the remains of San Pio from Pietrelcina.

Stage 7 starts on the shore of the Adriatic Sea, in Vasto. Its finish is in L’Aquila, where the Giro will commemorate ten years passing since the terrible earthquake that devastated the city and its surroundings in 2009. On Saturday 18 May the Giro runs from Abruzzo to the Marche where, after the start from Tortoreto Lido, the stage will finish in Pesaro, birthplace of the composer Gioacchino Rossini. At 235km it’s a long stage, with a very challenging finale.

Stage 9’s ITT from Riccione to San Marino is the only time the Giro d’Italia 2019 crosses national borders. Its very difficult course is in two parts: the first section until the course enters the Republic of San Marino is undulating, from where the second part, all uphill to the finish line. It’s also this year’s Corsa Rosa Wine Stage, dedicated to the Sangiovese wine. Monday 20 May is the first rest day of the Giro, in Romagna. 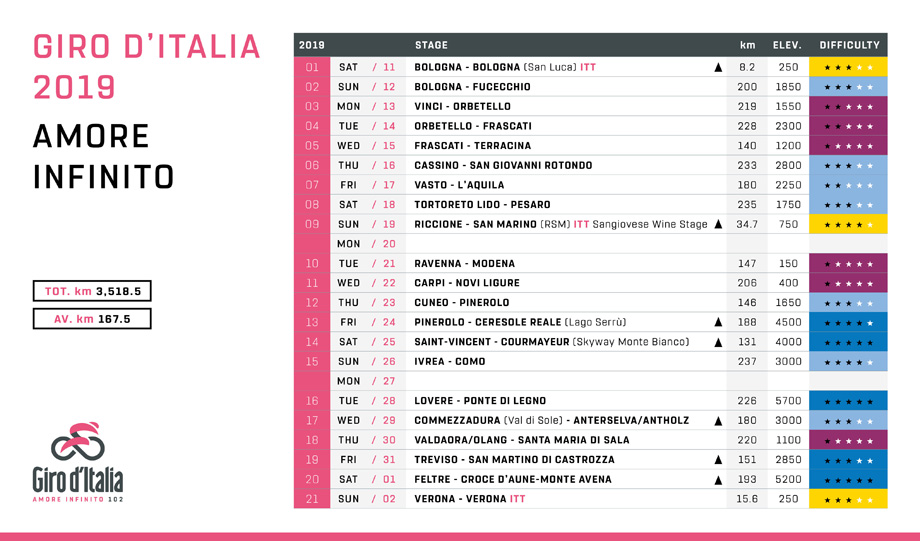 SECOND WEEK
The race resumes on Tuesday 21 with an entirely flat stage through the Po Valley: from Ravenna to Modena, through the areas that suffered in the 2012 earthquake. There’s a high probability that Stage 10 will finish with a bunch sprint. Stage 11 will start in Carpi and end in Novi Ligure. The finish line will be close to the home where the Campionissimo, Fausto Coppi, lived with Giulia Occhini (the ‘Dama Bianca’), who tragically lost her life in a car accident just in front of their house, in 1993.

Stage 12 runs from Cuneo to Pinerolo, in recognition of the historic feat of the Campionissimo in the 1949 Giro d’Italia when, attacking solo, Coppi finished with an advantage of over 11 minutes on his great rival Gino Bartali. The 2019 course will be different to that of 70 years earlier: it’s a short but punchy stage with a double passage of the Principi di Acaia wall (featuring gradients up to 20%) and the Montoso climb, the first Category 1 KOM faced in this edition.

On Stage 13 the climbing keeps on coming with three hard KOMs on the route from Pinerolo to Ceresole Reale (Serrù Lake) in Turin province’s Orco Valley. First it’s the Colle del Lys from the Val Susa side, then the Pian del Lupo (Santa Elisabetta) climb over Cuorgné/Castellamonte and then the final ascent of the Nivolet Pass until the Serrù Lake. The route is on the resurfaced ‘old road’, with gradients peaking at 14-15%.

Saturday 25th presents another 5-star stage, starting from Saint-Vincent and finishing in Courmayeur. Although it’s short – at 131km – Stage 14 features five KOMs and a total elevation of 4,000m, very high compared to the distance. The Verrayes, Verrogne, Truc d’Arbe (Combes) and Colle San Carlo climbs are faced before the summit finish of Courmayeur where, in 1959, Charly Gaul won the stage and wore the Maglia Rosa on his way to victory in that edition of the Giro d’Italia. These are long climbs with high average gradients, raced one after the other with barely a breath in between.

The following day is the longest stage of the race, 237km from Ivrea to Como. Riders will face the ‘classic’ finale of recent editions of Il Lombardia: Madonna del Ghisallo, Colma di Sormano (without climbing the Muro), Civiglio and San Fermo before the finish line on the shores of Lake Como. Expect those riders to be thankful that Monday 27 May is the second and final rest day of the Corsa Rosa, in Como.

THIRD AND FINAL WEEK
The final week of racing starts with a bang on Tuesday 28 May, from Lovere to Ponte di Legno: a long, testing Alpine stage of 226km with 5,700m of climbing! The riders will face the Presolana Pass, the Croce di Salven Pass, the Gavia Pass (Cima Coppi, the highest point of this edition) and the Mortirolo Pass (Montagna Pantani) from the hardest side of Mazzo di Valtellina. It’s an incredibly tough stage that could define the Giro d’Italia GC battle.

Stage 17 will start in Commezzadura, with a slight descent through the Val di Sole, before climbing until the Mendola Pass. After the descent towards Bolzano the route climbs up to the Eisack Valley and, after Bressanone, the Puster Valley. The riders will face the Naz and Terento climbs before the long final ascent towards Anterselva’s Biathlon Stadium, which will host the winter sports World Championships in 2020.

The following day, from Valdaora to Santa Maria di Sala, the 220km stage is practically all flat or descending, going through Cortina d’Ampezzo, Longarone, Alpago, Vittorio Veneto, Conegliano and Noale – up until the likely bunch sprint. Stage 19, from Treviso to San Martino di Castrozza, is short with a summit finish. The first part is hilly but not particularly hard, with the Montello and Passo San Boldo climbs ahead of the final ascent. The summit finish, with gradients that are not excessive, is suitable for rouleurs, and a breakaway may have a chance.

On Saturday 1 June the last mountains of the 2019 Giro await with a very challenging stage, the final summit finish of this edition. This Dolomites stage with over 5,000m of elevation includes the climbs of Cima Campo, Manghen Pass, Rolle Pass and the final ascent of Croce d’Aune-Monte Avena.

GRAND FINALE IN VERONA
The last ITT in Verona is 15.6km long, on the famous circuit around Torricelle. The first part of the final stage is on wide straight roads up until the Torricelle climb at 4.5km – on an average 5% gradient, with some steeper sections. There follows a 4km descent towards Piazza Bra and the Verona Arena, where the winner of 2019 Giro d’Italia will be crowned.

STATS AND CURIOSITIES
# For the second time in its history, the Giro starts from Bologna – following the 77th edition, which started on 22 May 1994. That race began with an in-line semi-stage won by Endrio Leoni, followed by an ITT taken by the Frenchman Armand de las Cuevas. Bologna was part of the first stage of the very first edition of the Giro, when, in 1909, it was the finish of the 397km Milano-Bologna stage, won by Dario Beni.

# For the fourth time the Giro d’Italia finishes in Verona with an ITT. The three previous occasions were:
· 1981, Soave-Verona: the stage was won by Knut Knudsen, and while the Swedish rider Tommy Prim gained two seconds on the Maglia Rosa, Giovanni Battaglin, the Italian won the 64th Giro with 38” over the Swede.
· 1984, Soave-Verona: stage won by the Italian Francesco Moser, who took the Maglia Rosa previously worn by Laurent Fignon. Moser’s average speed of 50.977km/h overturned a 1’21” deficit to the Frenchman within 42km.
· 2010, Verona-Verona: the stage went to Gustav Erik Larsson, yet the Italian Ivan Basso easily maintained his advantage and won his second Giro.

# The Emilia Romagna is the Italian Region with the most Stage-hosting towns, seven (five starts and two finishes), followed by Piedmont and Veneto, each with six (both three starts and three finishes).