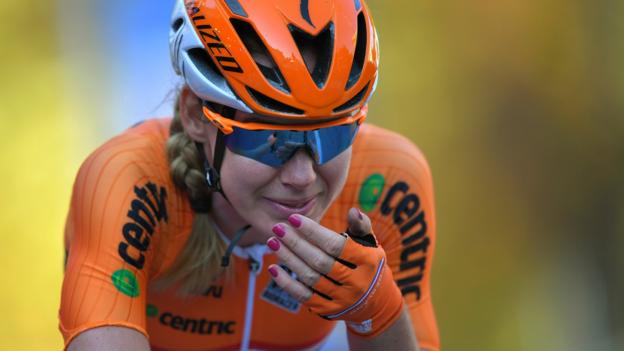 Anna van der Breggen of the Netherlands claimed a crushing victory in the women’s race at the Road World Championships in Innsbruck, Austria.

The Olympic champion, 28, attacked with almost 40km remaining of the 156.2km course to win by three minutes 42 seconds from Australia’s Amanda Spratt.

Dani Rowe was the highest-placed British rider in 26th place, 8mins 18secs back.

“[Only at] the finish line did I believe it’s possible. It’s amazing.

“World Championships are always [a target] and it’s so difficult to win it, so I’m really happy with this title.”

Rowe’s ride was not without drama. She was part of a crash involving Dutch rider Annemiek van Vleuten, then had a problem with her chain.

“It was absolutely brutal. I had a lot of bad luck. I got caught in a crash so had to chase back on. I didn’t panic but got back on just before the circuit,” said Rowe, who won team pursuit gold for GB at London 2012.

“I know I’m not the best climber but had to measure my effort. Up this climb the second time my chain got stuck and had a bike change with a lap to go.

“I’m not a mountain goat but I’m really proud how I rode and it’s always amazing to represent GB at the World Championships.”

Van Vleuten, who on Tuesday won gold in the world individual time trial for the second consecutive year, revealed after the race she had suffered a broken bone in her knee in the crash involving Rowe.

Writing on Twitter, the 35-year-old said: “Eminence fracture. Can’t believe it. So many emotions now. Will heal, but will take time… (weeks).”