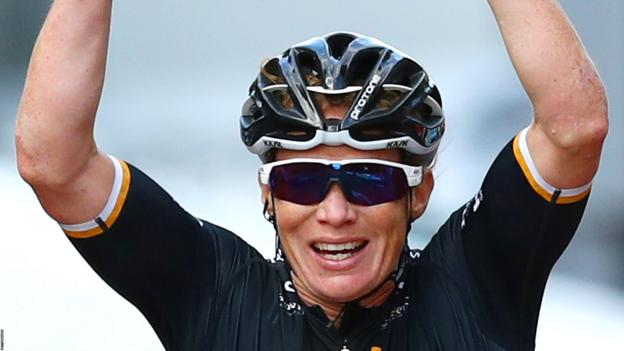 Kirsten Wild timed her sprint to perfection to win the women’s RideLondon Classique on The Mall.

The Wiggle High5 rider came past fellow Dutchwoman Marianne Vos in the final 20m of the 65km, 12-lap race.

Italian Elisa Balsamo was third across the line, with last year’s winner Coryn Rivera of Team Sunweb in sixth.

Exemplary tactics and nerve ensured that Wild, 35, became the first woman to win this event twice, having previously claimed victory in 2016.

While Vos’ sprint faltered, Wild – positioned clear of a crash that damaged the hopes of a number of leading contenders, including Rivera – judged her effort perfectly.

There was also a measure of success for Wild’s former team-mate Rowe, with the Briton gaining the most points in the three sprint finishes on laps three, six and nine.

Twice edged into second, she accrued a point more than Amy Pieters of Boels-Dolman, with Leah Kirchmann of Team Sunweb, last year’s winner of the intermediate sprints, finishing third.

The Classique, part of the women’s UCI WorldTour, is the most lucrative women’s one-day race with a prize pool of 100,000 euros (£89,000), which equals the total prize pool for the men’s race on Sunday.

Briton Mark Cavendish will feature after failing to complete the Tour de France, with the race being shown live on BBC Two, Red Button and the BBC Sport website and app from 11:00 BST.